Environmentalists are celebrating signs that a deep sea mining project in Papua New Guinea appears to be dead in the water.

Canadian company Nautilus was given approval by PNG's government to mine the seafloor of the Bismarck Sea between the islands of New Ireland and New Britain.

Its Solwara 1 project faced deep opposition among local community groups because of the potential environmental impacts from what would be the world's first seabed mining project.

But before starting mining, Nautilus' project support vessel has been sold to Indian company MDL Energy for repurposing.

Helen Rosenbaum of the Deep Sea Mining Campaign said that without the vessel it was difficult to see Nautilus ever developing Solwara 1.

Dr Rosenbaum said that given Nautilus' dire financial circumstances it was fair to say the game was over for the project.

"There seems little chance of them re-paying their bridging loans when these become due in less than a month.

"The people of the Bismarck Sea of Papua New Guinea have hopefully been spared an environmental disaster."

Catherine Coumans of Mining Watch Canada stated that "if Nautilus sinks, the amazing hydrothermal vents targeted for mining with their unique and diverse life forms will be given a reprieve.

"As will the marine ecosystems and fisheries of the Bismarck Sea," Dr Coumans said. 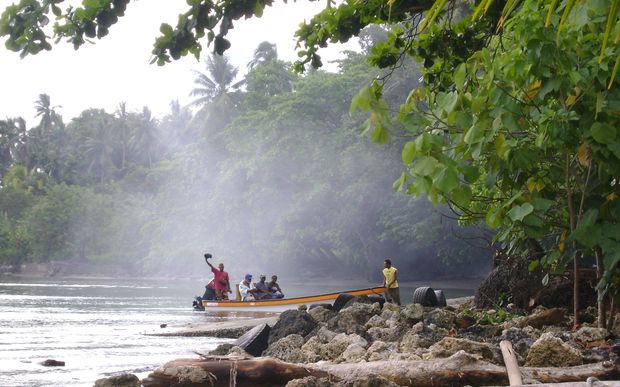 The news was also welcomed by Jonathan Mesulam from the Alliance of Solwara Warriors, whose New Ireland village is located 25 kilometres from the proposed mining area.

"It will be good news for my people if Nautilus goes bankrupt, instead of bankrupting our sea," he said , adding that the community would "fight this project to the very end".

The Alliance of Solwara launched a legal case against the project in PNG's courts last year.

"We are concerned that the Papua New Guinean Government has attempted to have our legal case dismissed," Mr Mesulam said.

"We are now talking to our legal team about filing substantive court proceedings against Nautilus and the State to stop the project.

Supportive of the project from the outset, having granted Nautilus its licence in 2011, the PNG government purchased 15 percent of Nautilus.