The ruling FijiFirst Party does not have any competition heading into the 14 November polls, a government minister says.

During a campaign rally at the weekend, the minister, Praveen Bala Kumar, said no other political party or their leaders could compare to FijiFirst leader Frank Bainimarama.

Opposition political parties were busy "solving their problems" and people who were "roaming around them" should not to waste their time and energy, Mr Kumar said.

Mr Kumar is a key member of the Bainimarama cabinet and will be contesting the 2018 election under the FijiFirst banner again. 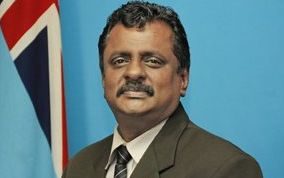 As the minister responsible for local government, Mr Kumar has not been able to deliver municipal elections despite saying it was his top priority to stage them when he was sworn in as a minister in 2014.

In the Fiji Times-Tebutt poll in June, 66 percent of those surveyed supported elected officials to run municipal councils as opposed to administrators appointed by the government.

Opposition political parties have also been calling for elected officials in Fiji's towns and cities.

In 2015, Mr Kumar confirmed that municipal elections would only be held after a review of the Local Government Act.