More than 5,000 kilometres away from his home in the Marshall Islands, the Mayor of Rongelap atoll, James Matayoshi, addressed hundreds of entrepreneurs, government officials and politicians in Hong Kong. 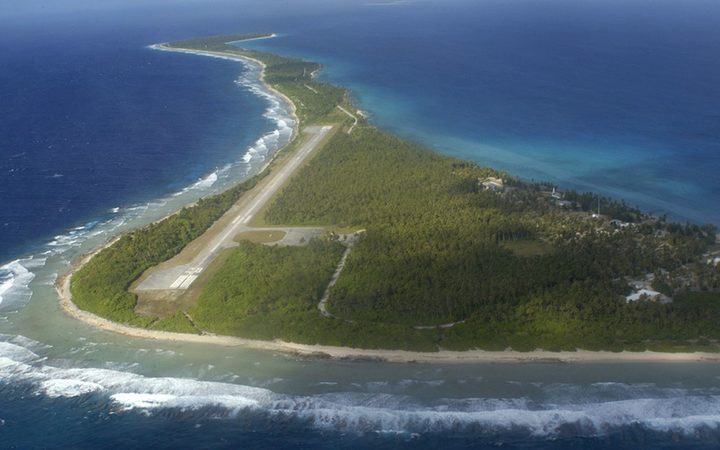 There, at the Asia World Expo in April, he unveiled his grand design for Rongelap, a remote coral atoll of 61 islets that sits just 3 metres above sea level.

It would become the "Rongelap Atoll Special Administrative Region", a utopia for foreign investment with relaxed tax and visa requirements.

But its attractiveness to wealthy businesspeople would also fuel Mr Matayoshi's own dream - a new city rising out of a former nuclear wasteland, providing local jobs, housing and elevation from the encroaching waters of climate change.

'There is nothing here'

Rongelap was twice evacuated after extensive nuclear tests by the United States from 1946-1958 covered its people in clouds of radioactive white ash, burning them and poisoning them for generations to come.

The US Department of Energy has since given the green light for resettlement but many residents are reluctant to return, wary of a country which said it was safe to return in the 1970s despite lingering contamination.

Most of Rongelap's former population - along with other evacuated atolls in the Marshall Islands - is found in the capital Majuro, or nearby Ebeye, in the Kwajalein atoll.

"Right now, there is nothing here in the Marshall Islands, especially in the outer islands," Mr Matayoshi said in an interview.

A special status for Rongelap would bring it out of isolation and into the "globalised economy", attracting former residents as well as foreign investors, he said.

The proposed legislation is only in draft form and has yet to go before the country's Nitijela, or parliament.

A copy seen by the Marianas Business Journal said the bill will introduce tax incentives, a new tax-free shipping port and services for offshore companies registered in Rongelap.

Crucially for potential investors, the region would also be exempt from two financial provisions of Marshall Islands law, which would streamline funding for projects but has raised concerns it will lead to money laundering.

The proposed laws were confirmed to RNZ Pacific by Mr Matayoshi and John Masek, an attorney working on the project, but they declined to provide a copy of the draft bill, saying it was subject to changes.

Mr Matayoshi and Mr Masek denied that it would enable money laundering or other financial malpractice.

But their proposal - which was to be financed in part by the sale of gold until an investor recently pulled out - follows warnings last week from the International Monetary Fund against the adoption of a legal tender cryptocurrency in the Marshall Islands, after its parliament passed a law in February.

In March, the Marshall Islands was lifted out of an European Union tax haven black list to a "grey list", meaning it is still on notice to change its ways.

The plans have sparked talk of passports for sale and an easy way to access the United States, through its Compact of Free Association agreement with the Marshall Islands.

The Marianas Business Journal reported the US Embassy in Majuro has raised concerns with the Marshall Islands government about the plan, after it received questions on whether the US government would recognise the region. The embassy did not respond to requests for comment.

Environment Minister David Paul told the Journal that he had received requests to buy passports because of the bill. "This needs to be exposed. It is getting out of hand," he said. Mr Paul did not respond to interview requests.

Online advertisements on Chinese websites claimed as many as 1,000 houses pitched to investors in the proposed scheme have been "sold out".

"For [those] who has successfully ordered the houses, what you get is not only a house but to share the policy benefits of Rongelap Atoll Digital Special Administrative Region," one advertisement said.

Mr Matayoshi and Mr Masek said there were no plans to offer citizenship to visitors and nothing would be for sale until the bill had been passed by parliament.

"Any other speculation about us selling passports or trying to promote passport schemes is all fake news. All we're trying to do is make a more visitor-friendly environment," said Mr Masek.

The project's backers have teamed up with Chinese businessman Cary Yan, who is a Marshallese citizen and is helping to find investment partners, Kenneth Kedi, the parliamentary speaker, and Kessai Note, a former president of the Marshall Islands.

Together, they claim to want to replicate the success of commercial hubs like Dubai, Singapore and Hong Kong in Rongelap, which spans 8 square kilometres of mostly ocean.

For Mr Kedi, Hong Kong is a blueprint for Rongelap in more ways than one.

"Through the unique 'one country, two systems', Hong Kong has become China's re-export base and a global financial center in opening up the economy," he told the April expo in Hong Kong, according to the China Daily.