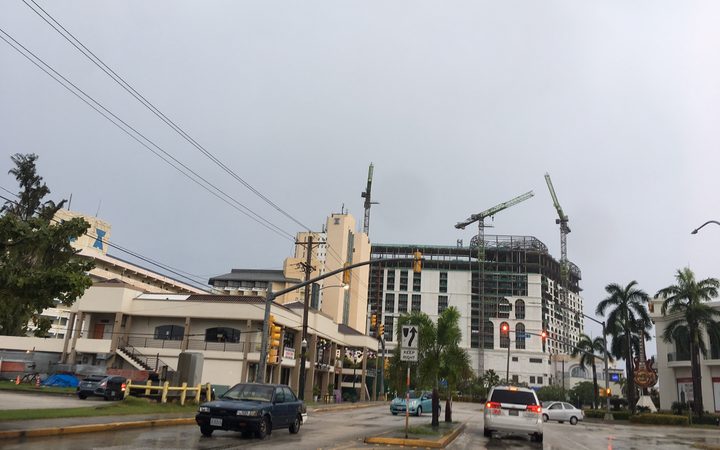 Typhoon shelters in the Northern Marianas are filling up as people prepare for Typhoon Mangkhut. Photo: RNZ Pacific/ Mark Rabago

The Northern Marianas is bracing for a direct hit from Typhoon Mangkhut, which continues to strengthen as it slowly approaches.

A typhoon warning is active for all of the Marianas islands, including Guam.

The storm is currently a category two, with winds as high as 160km/h.

Thousands of people are in evacuation centres, and schools and government offices have been ordered closed.

Our correspondent on the island of Saipan, Mark Rabago, said the storm is expected to pass overnight.

He said the island of Rota is forecast to suffer a direct hit.

"For the past two days, the island's residents have been preparing for the worst," he said.

"The newest projection is it's either going to directly hit Rota or go a little north of it."

He said the Northern Marianas has effectively shut down, with all flights cancelled.

Further south, people in Guam are being urged to seek shelter from Typhoon Mangkhut.

The storm is forecast to pass less than 100 kilometres north of the island.

Some have reached capacity, and people are being moved to other shelters.

Guam's lieutenant governor, Ray Tenorio, said there is enough shelter for everyone.

"If you don't have any typhoon shelters, if you have any questions, about if you're going to be safe in the storm please go to the schools in your community that have been opened up," he said.

"It's very important that you make sure that your family is safe."

The effects of the typhoon are due to be felt from Monday evening, with the island bracing for as much as a metre-and-a-half of rain.

The National Weather Service said all boats should seek safe harbour and be tied down, and loose objects should be secured.

The island's American Air Force and Navy bases have closed, with response units on standby.