A refugee on Papua New Guinea's Manus Island has mounted a protest against four companies providing services to about 600 men exiled there by Australia. 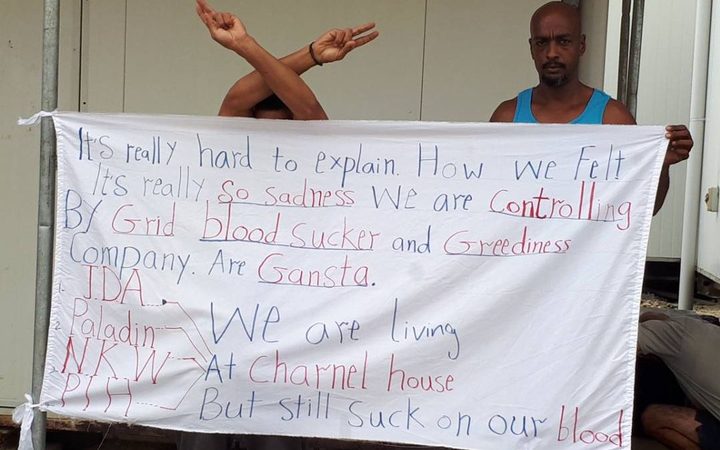 Bashir Osman displays one of his protest banners. Photo: Supplied

The men have been detained indefinitely on the island since 2013.

"I'm doing this for everyone because the four companies, they're keeping us hostage," Mr Osman said.

"All those companies they're like bloodsuckers, they don't care about us," he said.

"Everyone is scared... the people they become like walking dead. They don't want to protest for him life. If you did anything here, you need to go direct to jail... The law is against us the police is against us."

The refugee protested alone outside a service providers' office at West Lorengau Transit Centre for four hours on Monday. Other were too afraid to join him, he said. 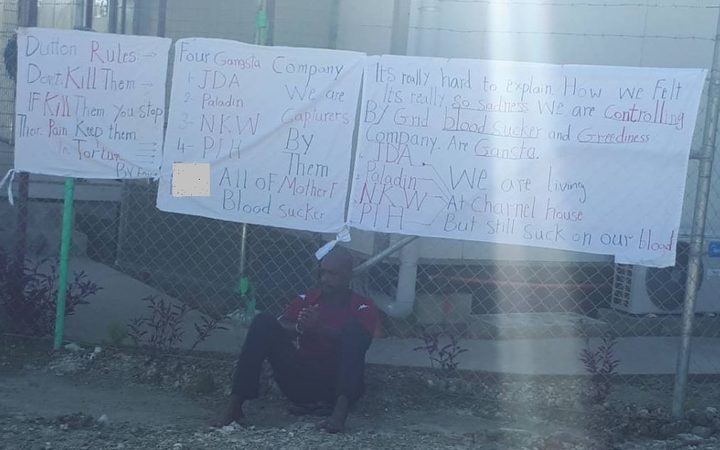 In 2016, the PNG Supreme Court declared the men's detention unconstitutional, and in 2017 they were paid $AU70 million compensation by the Australian government for false imprisonment.

A 6pm to 6am curfew was imposed on the refugees in June, however, which their lawyer said was illegal.

Targeting the four companies for profiting from the refugees' ongoing incarceration, Mr Osman said he wanted to let the world know they were involved.

"They control everything. You're a refugee but you have no right to work, to do whatever you like. They're doing their business and no one care."

PIH was not providing adequate treatment for the refugees, who were prevented from leaving Manus to seek healthcare at their own expense, Mr Osman said.

PIH did not respond to multiple requests for comment from RNZ Pacific, including to a claim it was not using interpreters to help refugees understand their English speaking doctors.

Kurdish refugee and novelist Behrouz Boochani said the refugees had written to the companies to warn them that their were "many serious psychological cases of refugees on Manus Island... that needed urgent support".

"No action is being taken," he said.

A refugee in the East Lorengau camp on Manus is extremely depressed and has been refusing to eat for nearly a week. He is not the only one who needs help, there are too many. But his situation is very critical now. There isn’t any psychological treatment and support on #Manus.

We’ve been living in a limbo for more than five years now. This barbaric exile policy has already killed 12 innocent people, destroyed so many lives and families. Shame on the Australian politicians and their media for ignoring what is happening here. It’s nothing but sadism.