A report into last year's stranding of a container ship in New Caledonia has blamed a multitude of human errors.

Last July, the 184-metre Kea Trader ran at full speed into the Durand Reef which is well mapped.

It then broke in two during a storm, spilling debris and oil into the ocean which later washed up on the territory's beaches. 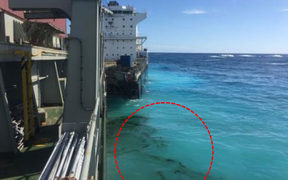 The Kea Trader has been leaking oil Photo: Supplied

The maritime safety authority of Malta, where the vessel was registered, said although the ship had top navigational equipment its crew ignored warnings.

The report said on the night of the stranding, the weather was clear and the swells were moderate.

The Kea Trader's navigation system had no particular problem, although it was not configured correctly and its alarms had been deactivated, it said.

The captain and his second-in-command appeared to have ignored warning messages.

The report concluded the collision came down to human error, particularly the crew's overconfidence in the ship's technology.