West Papuan students in the Indonesian city of Malang say police forcefully stopped them discussing an important date in their people's history. 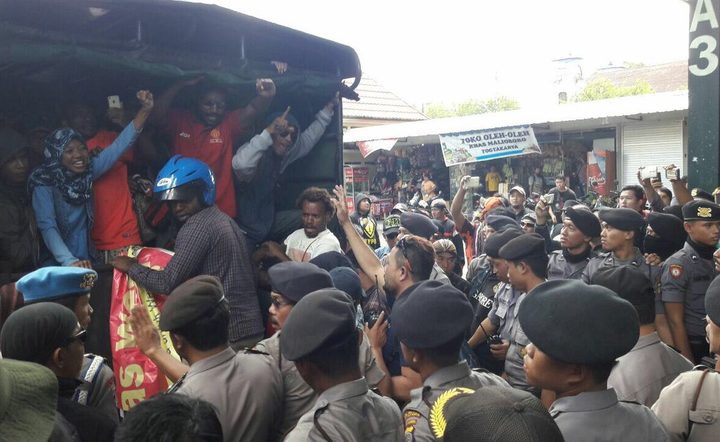 Protestors detained by police, Yogyakarta 15 August 2017. Protests were held in several Indonesia cities that day to mark the anniversary of the agreement which sealed West Papua's incorporation into the Indonesian republic. Photo: Supplied

July 1st was the 47th anniversary of a proclamation of independence by the Free West Papua Movement shortly after Indonesia took control of West New Guinea.

The anniversary is often marked by demonstrations or public events in Indonesian cities.

On late Sunday around three dozen West Papuan students at Malang's Brawijaya University held a discussion about the anniversary in their dormitory.

But according to one of the students, Yohanes Giay, police entered the dormitory, physically roughed them up and prevented their discussion continuing.

He said West Papuans had a right to free discussion, including about the history that has shaped them and their region.

"We discuss because that is our past, and we can keep remembering the past as we fight for our freedom from Indonesia," he explained.

"If we want this freedom, we must hear about stories from the past, so we can work for a better future for Papuans."

Mr Giay said the students were considering holding a demonstration in the near future to express their concerns.

"I think we will make some demonstration with our solidarity in Malang. We want this city to be a city without the racism."