There are calls for a formal system to help the descendants of blackbirded Pacific Islanders find their relatives.

In the Pacific, more than a million people are thought to have been blackbirded, meaning tricked, coerced or forced into indentured labour or slavery, a practice that ended over a century ago. 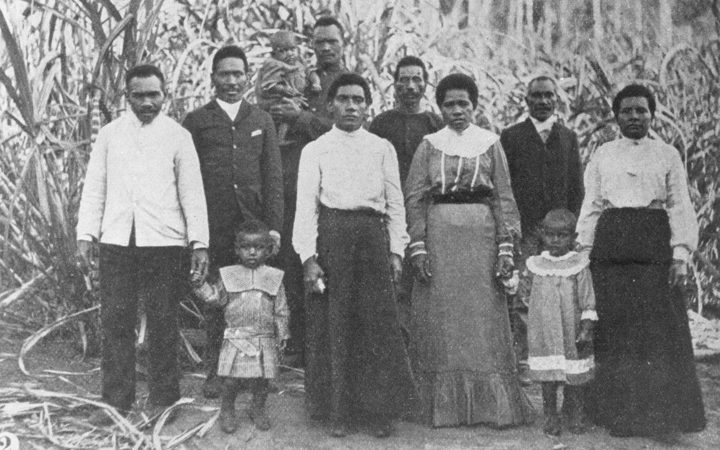 Their descendants in Australia, known as South Sea Islanders, have long sought assistance to trace their lineage.

Now the legacy of Blackbirding has led ni-Vanuatu to look for family links in Australia.

About 60,000 Pacific islanders were blackbirded to Australia in the late 1800s to work primarily in the sugar cane industry.

Around 7000 were deported back to Melanesia in the early 20th century after the introduction of the White Australia policy.

Some returning to Vanuatu took Aboriginal wives and adopted children from whom the former Vanuatu MP Abel David said he was descended.

"My mother's grandfather was brought out here through the slavery days. They took him home and they look after him," Mr David said. 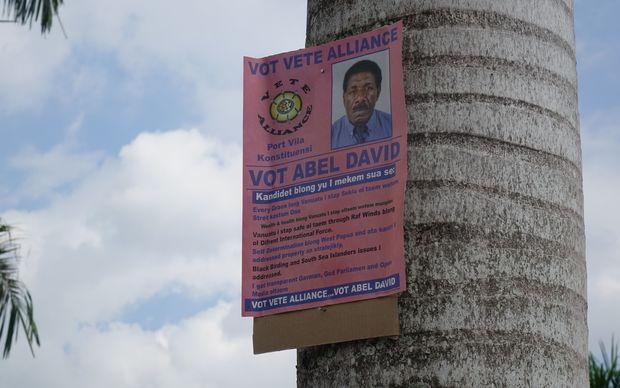 The descendants of Indigenous Australians could be found across Vanuatu, he said.

"They are from Tongariki Island in the Shepherd Group and then from Ambae which is Penama Province. Sanma Province on Malo and I just received a message from Torba Province. Also Tafea province, so it looks like it will cover almost the six provinces."

Mr David and his brother, Chief Fandanumata Richard David, led a small group of Vanuatu's Aboriginal descendants to Adelaide last month for an exhibition explaining the history of Blackbirding.

The group was hosted by the president of the Pacific Island Council of South Australia, Tukini Tavui, who took the ni-Vanuatu to galleries showing Aboriginal art.

"The first one they went to, Chief Richard just burst out in tears, just wept. Aboriginal people here came and hugged him," Mr Tavui said.

"The director came down and said you can take whatever you want from this gallery, we're giving it to you as a gift for coming back home."

The Blackbirding exhibition in Adelaide featured the work of artist Helen Stacey Bunton.

"With the work about Beaudesert, I interviewed Aunty Ginette Kirk, who is an islander descendant and she married into the Aboriginal community," Ms Stacey Bunton said.

"So there's a statement from her where she's reflecting, looking across the country where the first cotton field was, saying look how hard our people worked to clear the land and look how hard it was for the Mununjali to lose their land." 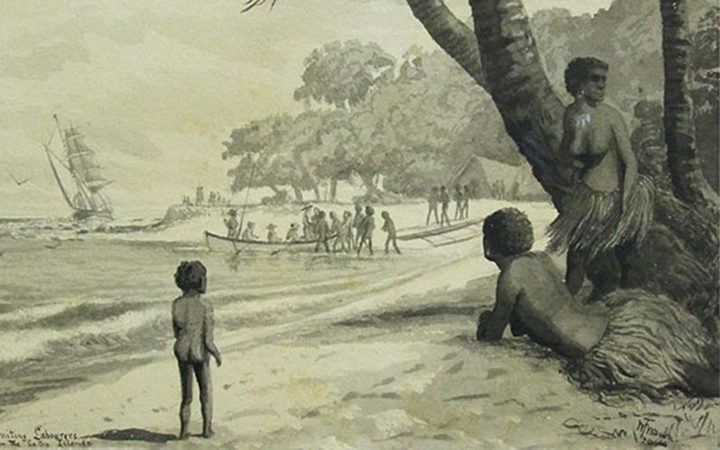 An artwork from the Blackbirding exhibition. Photo: History Trust of South Australia

The artist also collaborated with her husband David Bunton, an amateur historian related to a missionary who opposed Blackbirding in Vanuatu when it was known as the New Hebrides.

"My great grandfather, Reverend Dr John G. Paton, went out to New Hebrides in 1858. Blackbirding began shortly after he went there and he could see that it was stripping the villages and islands of men," Dr Bunton said.

In Vanuatu, Dr Bunton said he met three sisters descended from an Aboriginal woman brought to the country in the early 1900s.

"And they were desperate to meet their Australian Aboriginal family who they said were from the Woiwurrung people in the Melbourne area," he said.

"We've checked and there is a Woiwurrung people in the Melbourne area. But we couldn't track that any further."

Emelda Davis is the spokesperson for the National Governance Working Group for Australian South Sea Islanders.

Ms Davis said Indigenous Australians were asking for her help to find lost relatives in the Pacific.

"I've got about 100 people that have contacted me to find their family. And we're talking prominent family names in our Aboriginal community," she said. 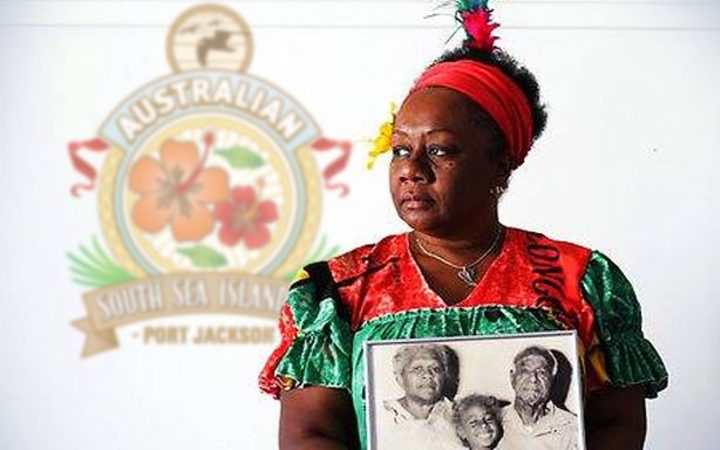 Mr David said he had become an unofficial intermediary for South Sea Islanders looking for relatives in Vanuatu.

"There's another two family coming on the 22 of this month where I've helped them to trace their family to the island of Santo and one to Ambae," Mr David said.

"So it's more or less like my job to help the lost descendants in Australia."

With an estimated 40,000 South Sea Islanders in Australia and possibly 4000 Aboriginal descendants in Vanuatu, it was time the Australian government established some sort of framework to help people trace their lineage, Ms Davis said.

"100 percent there needs to be a framework. We need an injection of financial support," she said.

"Things need to be authenticated. There's a lot of confusion around what's happened to our people therefor misconceptions about certain things. What you may think is your family may transpire to be not so. We've had instances where people have been completely confused with what island they've come from." 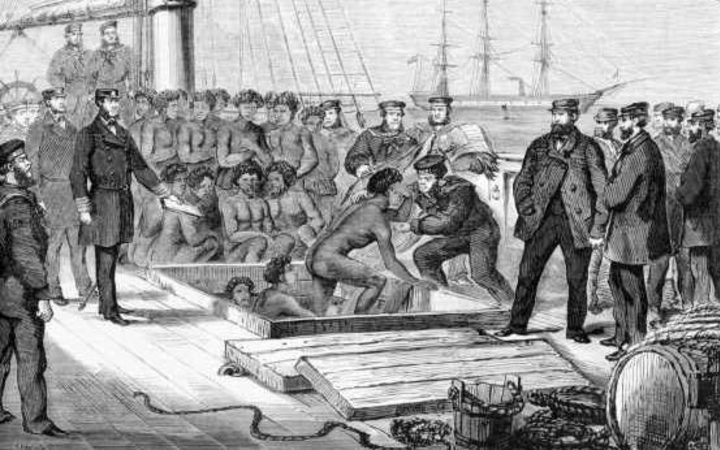 Seizure of the blackbirding schooner Daphne in 1869. Photo: State Library of Victoria.

In 1994, South Sea Islanders were officially recognised as a disadvantaged group in Australia where there is still resistance to acknowledging Blackbirding as slavery.

While some of those blackbirded might have been contracted and paid as indentured labourers, academic Clive Moore said it was their decendants' definition of slavery that mattered.

"It's no use historians saying 'well, this is just not true' if it is the factor which forms the identity of an entire community that Australia recognises as a disadvantaged group," Professor Moore said.

"Even I have changed my ground slightly over several decades and there's a dialogue, there's a very long conversation gong on with South Sea Islanders but they are very firm in what they think Blackbirding means and that it was something that they call slavery."