A complaint has been lodged in French Polynesia, accusing the president Edouard Fritch and four of his ministers of misspending public money to fund their election campaign.

The complaint by a pensioner Yves Conroy alleged that they violated the electoral law which bans politicians from using taxpayers' money to travel to political meetings. 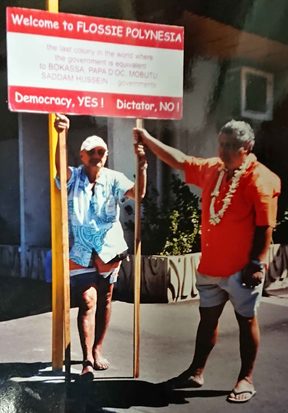 The first round of the territorial election is due in two weeks when Mr Fritch's Tapura Huiraatira party is seeking to retain its majority.

Mr Conroy said the case against the five Tapura politicians is likely to be heard months after the election when campaign accounts are vetted.

He predicted that Mr Fritch, as the top candidate, will be forced out of office.

"There is no possible defence because there is this court ruling in France against Sarkozy. He had used his government trips to hold political meetings."

Mr Conroy was the complainant about phantom jobs being created by Gaston Flosse in the 1990s which led to the his final conviction in 2014 and left him ineligible to hold public office until 2019.

Edouard Fritch, who was also convicted in the phantom job case, was at the time Flosse's deputy at the helm of the Tahoeraa Huiraatira party.