A Papua New Guinea MP says he is trying to verify reports that up to 10 people died in this morning's earthquake in Hela Province. 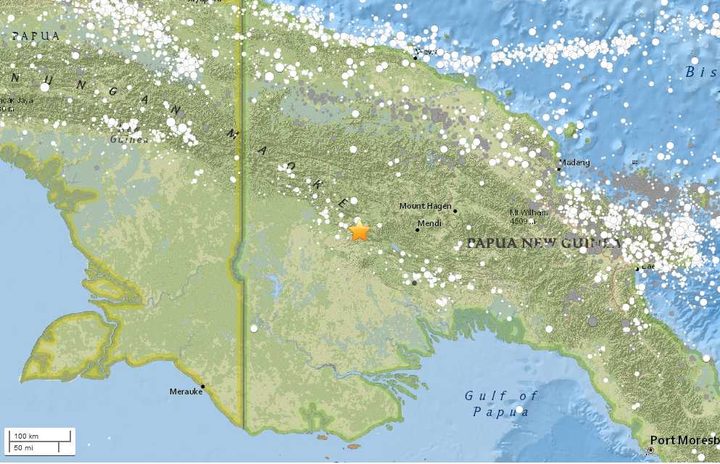 According to the US Geological Survey (USGS), the magnitude 7.5 earthquake struck at a depth of 35 kilometres in Komo-Magarima district.

It struck at 4am local time, according to te USGS.

The mobile phone network in the region has been disrupted, frustrating attempts by people in other parts of PNG to gauge initial reports of damage from the quake.

However, the local MP, Manasseh Makiba, said he received preliminary reports from ExxonMobil personnel, via their satellite phones, as well as people in his district on landline phones.

"The reports are coming that the earthquake was very huge, and there was some casualties. There were landslides and destruction of some properties and houses. And there were reports of some lives being lost ... about ten."

Mr Makiba said the National Disaster Office is expected to dispatch a team to the area to assess the damage.

The quake is understood to have been felt in neighbouring provinces including Southern Highlands, Enga, Western Highlands and Western.

The epicentre of the quake is located in a rugged region near Mt Sisa, which is close to key infrastructure for PNG's ExxonMobil-led LNG gas project.

Earlier, a spokesperson from Exxon told RNZ Pacific that all of its employees and contractors at its Hides gas facilities had been accounted for and are all safe.

She said that as a precaution, ExxonMobil PNG Limited had shut in its Hides Gas Conditioning Plant to assess any damages to its facilities.

About half an hour later an earthquake with a magnitude of 5.5 struck in the same area with a depth of 39 kilometres.

According to the Pacific Tsunami Warning Center, there was no regional tsunami threat.