Tonga could take six months to recover from what's being called the worst storm there in 60 years, while nearly half a Fiji island's residents are still in evacuation centres. 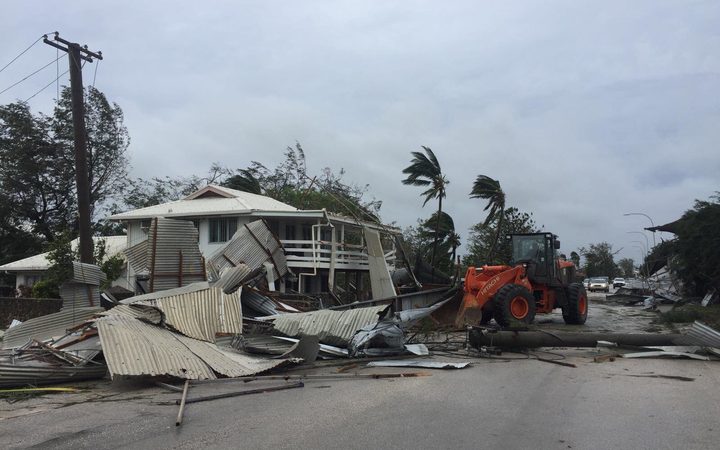 Neither Vanuatu nor New Caledonia are expected to be hit hard by the storm, and it is expected to fall to category three before passing over Norfolk Island.

It appears the worst damage is already done however, after the storm made landfall in Tonga on Monday night as a category four cyclone, ripping roofs off houses, destroying crops, and destroying a church as well as Parliament House.

Thousands of people are still unable to return home and the government has confirmed three people were seriously injured by the cyclone.

The Red Cross said water and electricity are still out for many people in the island group.

Its local adviser, Poli Kefu, says almost every second house visited had damage from the cyclone.

"I think it will take more than another six months to recover for Tongatapu, which is the main island," Mr Kefu said.

"This is more than likely the first time in 60 years for them to experience this very powerful, damaging cyclone."

Mr Kefu says people in Tonga should drink only boiled or bottled water, to avoid sickness.

She said more than 4000 people went to the Tongatapu evacuation centres during the cyclone, and many of them were still there.

"The priority is to get the electricity going, mostly because it is used for water pumps and secondly it would be to get the reticulated water moving in the capital.

He said power had been restored to the hospital and the water board were starting to get some facilities up and running, but for a lot of people another problem was they no longer had anywhere to live.

"We started some distributions yesterday, just urgently needed shelter for the families that have lost everything we've been able to get out some family kits for them so at least they'll have some shelter overnight.

"It has rained overnight, and it's making things very very difficult for people who don't have shelter.

"That's our focus again this morning for our other teams is to get shelter out to some people.

He said Australia and New Zealand were sending generators along with supplies to help get the power running again, and there seemed to be enough fuel to run them.

New Zealand's acting high commissioner to the kingdom, Elena Procuta, said early assessments conducted by the Ministry of Agriculture after the cyclone show there is enough food for the short-term.

She said root crops like taro, cassava and yams have not been badly damaged and they could meet immediate needs.

However there were also concerns for tree-grown staples like plantains, breadfruit and bananas.

"The government is still working out how they're going to manage the food security situation but an early assessment might be that it's not as devastating as it could have been. They've got sufficient for the short term."

Meanwhile nearly half the residents of Fiji's Ono-i-Lau island are in evacuation centres because their homes were so badly damaged by Cyclone Gita.

The category four cyclone passed over the small island, halfway between Tonga and Fiji, close to midnight on Tuesday.

The chief of Matokana village on Ono-i-Lau, Noa Sukanasau, said more than 200 locals were staying in centres across the island.

"The eye of the cyclone, Gita, passed really close to Ono island and we experienced very high wind, damaging wind.

He said the cyclone began bringing "terrible damage" to all four villages about 11 o'clock.

"Total of 12 houses were blown completely out, right on the ground and about 24 I think, or 28, were badly damaged.

"Part of the roofs, corrugated iron roofing were blown off.

He said gardens were damaged by the storm and the villagers would likely have to watch their plantations rot away.

"We've received news from the government that the next boat will be sailing sometime this week, it will be brining in kumara crops, tapioca, banana crops for us to replant everything again.

"We are fortunate that we have the government looking at our plight right away.

Mr Sukanasau said Cyclone Gita had been one of the most severe storms in memory, but residents on the island are resilient and he is confident they will recover.

Community groups and humanitarian organisations in New Zealand are calling for donations to help Pacific countries hit by Cyclone Gita.

The Ōtāhuhu-Mangere Youth Group and Ōtāhuhu Rotaract group are receiving donations of clothing and non-perishable food over the next three days.

"We're going to do some emergency kits in the first instance to make sure people have got somehwere to go home to, but the major project is going to be reconstruction of cyclone-resilient homes.

"And so we would be very welcoming of donations to support us in that work.