Residents of Nuku'alofa endured a "terrifying" night with huge amounts of debris, trees uprooted, and roofs ripped from buildings. 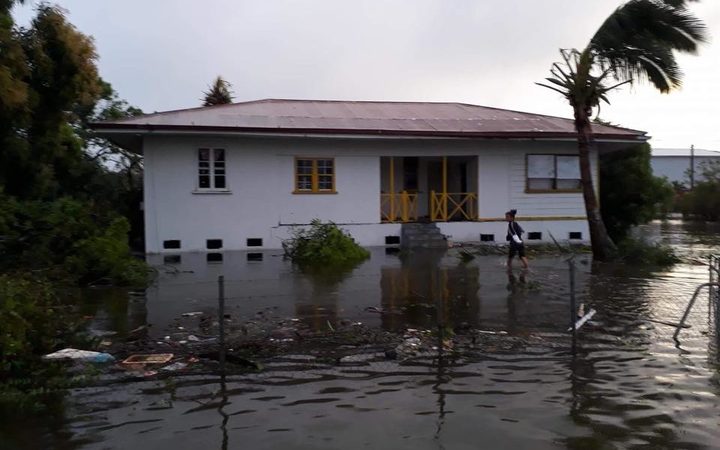 Correspondent John Pulu told Morning Report that many of the buildings in the capital stood no chance against such ferocious winds and many older structures have suffered significant damage.

With winds around 200km/h during the night, Mr Pulu said there had been significant damage to hundreds of buildings in the capital, and there was also significant flooding in some parts of the town.

Power was still out and it could be some days before the network is repaired.

"I'm dreading the damage in the outlying villages, they only have structures designed to withstand a category two or three storm," he said.

A 100-year-old mango tree looked like a bomb site and other trees had just snapped in the wind, she said.

"We have not seen a storm like this in decades," Ms Fonua said.

"The wind was terrifying. It was roaring overhead. We could hear roofs being lifted. Amazingly, the emergency services were still going out.

"I could see the people across the road, their roof was flapping around the house, it was trying to disintegrate. I think a lot of people were very desperate last night."

New Zealand cabinet minister Jenny Salesa said she had received word that her parents were safe after their home was hit by Cyclone Gita in Tonga.

She had not been able to speak to her parents directly, but her brother rang this morning and told her they were alive.

"There's a lot of damage to the house, but the most important [thing] for me is that both my parents are alive," Ms Salesa said.

"This is really personal to me, I was born and raised in Tonga so to see that kind of devastation is really, really heartbreaking."

A lot of the buildings in Tonga were not built to withstand such strong winds and she was just hopeful not too many lives had been lost.

The British Met Office said it was the strongest cyclone to pass close to the islands of Tongatapu and 'Eua in 60 years.

Gita is expected to hit the southern Fijian islands of Lau and Kadavu with average winds of up to 215km/h expected by midday.

The Red Cross said at least three houses had been destroyed.