Beleaguered airport workers in Fiji say their employer is "clutching at straws" in its latest accusation of corruption against them. 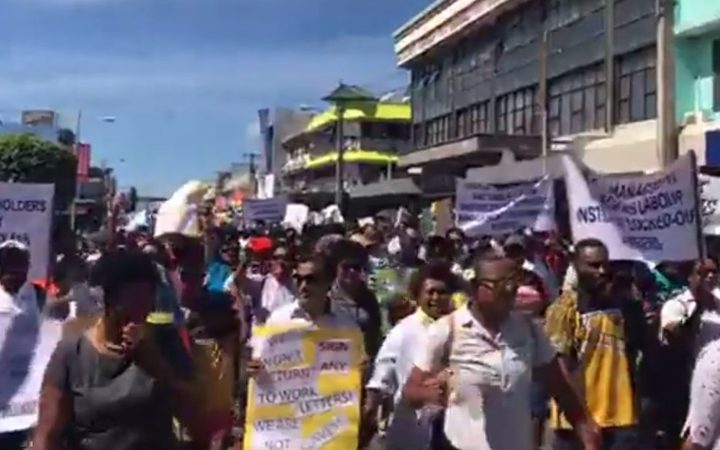 Nearly 900 people marched in support of ATS workers who claim they were locked out Photo: FTUC

Up to 200 Air Terminal Services employees said they had been locked out of work since holding a meeting a month ago.

ATS management deemed their attendance at the meeting illegal.

Workers said there was a history of mistreatment at the company, which is 51 percent owned by the government.

The remaining 49 percent is held by an employees' trust.

FBC News reported ATS board chair Riyaz Sayed-Khaiyum said there was a possibility that unaccounted-for dividends to the employees' trust may be reported to the police and the anti corruption agency FICAC.

A spokesperson for the workers trust, Vili Finau, said not only was the money all accounted for it had nothing to do with the standoff.

"The issues that we are fighting for is the cost-of-living adjustment which affects all the workers."

"The $FJD5.7 million relates to the ATS Employees Trust, which relates only to the beneficiaries of the company. It is a non-issue as far as we are concerned, and we have absolutely no problem with this issue as every cent is going to be accounted for."

Worker concerns include an 11-year pay freeze, allegations of sexual harassment and claims there have been attempts to sell their shares.

The meeting was held to discuss those concerns.

ATS management said workers were welcome to return to work provided they signed letters admitting their attendance at the meeting was illegal.

Over the weekend at least 2500 people took part in a march in support of workers at Fiji's main airport.