Another march is being held in New Caledonia today to push for the automatic enrolment of Kanaks for next year's independence referendum. 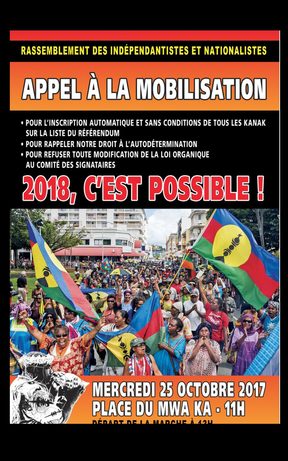 The group of pro-independence supporters and nationalists has called for the march in Noumea to go to the French High Commission.

It's the third in a year and this one targets next week's Paris meeting of the Noumea Accord signatories which is to discuss the enrolment issue.

The group wants all Kanaks to be put on the special roll for the plebiscite without first registering on the general roll.

An opinion prepared by the highest administrative court said a law change could be possible, which would pave the way for anyone born in New Caledonia to be automatically enrolled for the referendum.

The group said it wanted no law change but the outright recognition of all Kanaks' right to be allowed to vote.

An independence referendum in 1987 was boycotted by the indigenous people and more than 98 percent voted in favour of staying with France.