Refugees and asylum seekers held at Australia's immigration detention centre on Papua New Guinea's Manus Island have been told water, food and power will be cut at the end of the month. 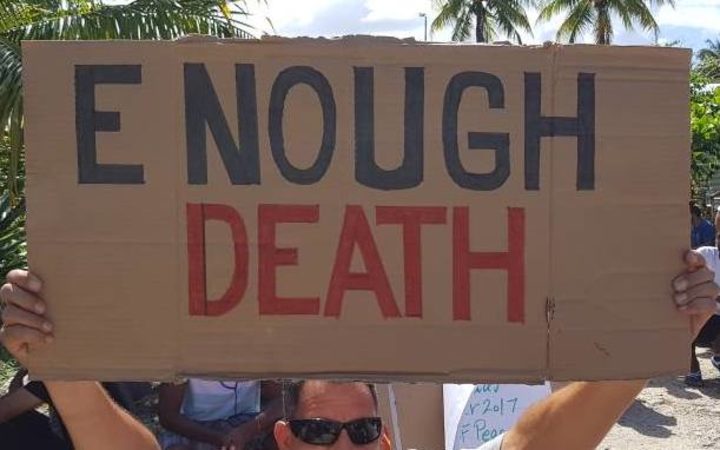 A Manus Island detainee holds a placard during the 81st day of protest. Photo: Behrouz Boochani

The centre, at the Lombrum naval base, is due to close on 31 October, when detainees have been told fences will be removed and the PNG defence force will take command.

The centre's 700-odd male occupants are being co-erced into moving to three buildings in the island's Lorengau town, which they are resisting out of fear of further attacks by the local population.

Dozens of detainees had been robbed and assaulted in Lorengau, whose residents are also opposed to the detainees' relocation.

Earlier this year, naval personnel opened fire on the detention centre following a dispute with detainees.

Kurdish journalist and detainee Behrouz Boochani said the men in the centre were terrified by the danger posed by locals on one side and the navy on the other.

Their protest against the relocation and their indefinite detention continued into its 83rd day yesterday, with local Manusians planning their own protest on the 31st.

About 2000 people have been marooned on Manus Island and Nauru for four years for trying to reach Australia by sea to seek asylum.

Australia justified its offshore detention policy as a deterrent to people smugglers and other displaced people considering the dangerous ocean voyage from Indonesia.