Plans have been revealed for two additional facilities to house Australia's detainees on Papua New Guinea's Manus Island after the detention centre is closed at the end of the month. 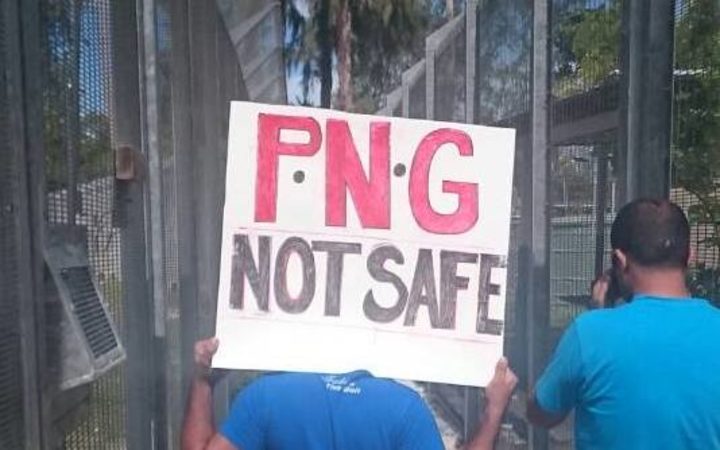 A placard from the daily protest at the Manus Island detention centre. Photo: supplied

Detainees are resisting pressure to move to the East Lorengau Transit Centre and now they have been told they will also be accommodated in West Lorengau Haus and Hillside Haus.

All three facilities are in Lorengau town about thirty kilometres from the detention centre.

Many men in this bracket refused to submit to PNG's highly criticised refugee determination process for fear it would result in them being forced to settle there.

A note posted in the detention centre said three meals each day would be provided in Hillside where visitors would not be permitted.

He said it intended to accommodate 241 refugees in West Lorengau Haus, where posted information suggested detainees could await resettlement in the United States, make plans to move to another country, consider repatriation or settling in PNG.

Men in West Lorengau Haus would be provided with a weekly allowance to cover food, clothing and expenses and would be free to come and go.

Health care services for all detainees would be provided at the East Lorengau Transit Centre where Mr Boochani said another 230 refugees could be accommodated.

"Their plan is to transfer the refugees to these places before 27 October," he said.

He also warned of more violence in Lorengau where dozens of refugees had been attacked and robbed.

"Local people don't want the refugees in their small community and there will definitely be more conflict between refugees and local people if the government presses ahead with this plan."

Fear of life in Lorengau was regularly highlighted at the detainees' ongoing, daily protests against their looming eviction from the detention centre.

A detainee known as Naji said detainees could be evicted by force to a place of "real danger".

"The new place in the west is so so danger... No one can protect us outside... Locals will come in steal, kill and no one can can stop them. There's no fences at all it is in the middle of locals houses."