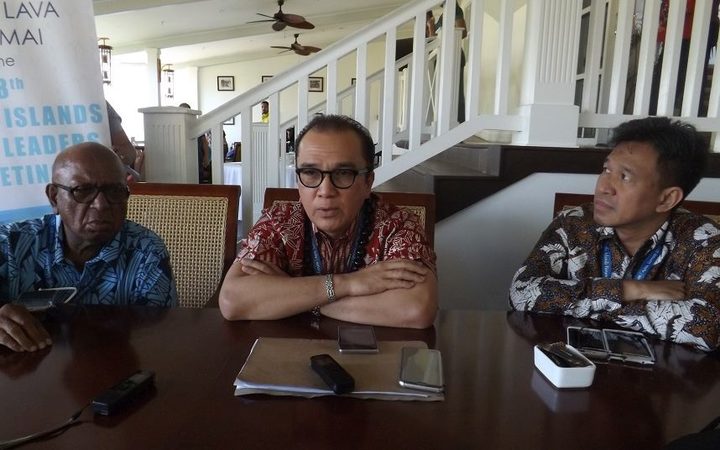 At least 30 local people supporting the West Papua independence movement took part in a peaceful protest this week in front of the hotel where the Pacific Island Forum leaders summit is held in Samoa.

A member of Mr Yahya's delegation also accused one senior journalist of asking provoking questions in support of the West Papua issue.

The Ambassador said the reporter's questions were based on outdated information.

West Papua was one of the issues raised by the civil society delegation in this week's Forum leaders meeting.

But Ambassador Yahya said the issue of Papua was not on the agenda at this Forum meeting.

"First it will not bring any relevant issues which connects to the agenda and the second, it's kind of, in our perspective talking about Papua in this conference is not in place because from the begining there is no agenda as such that will be concerning the issue of Papua," he said.

Mr Joku, who is in Samoa because Indonesia is a Forum dialogue partner, said the Forum meeting is not the place to raise the West Papua issue.

He said Pacific Island countries were now questioning West Papua's integration into Indonesia in 1969 when the process had been relegated to the history pages.

Mr Joku went on to say West Papuans had never seen Samoans and Fijians, adding they should not pretend that they wanted to help.

Pacific Islands countries most critical of Indonesia's West Papua policy, such as Solomon Islands and Vanuatu, didn't become independent before 1978.

The Indonesian delegation is among other Pacific Island Forum dialogue partners, such as the United States, China, and Japan.