The United States military has awarded the first major contract for the construction of a Marines base on Guam. 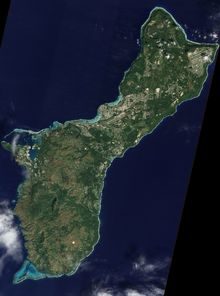 The military plans to relocate about 4,000 Marines to Guam from Okinawa, after striking a deal with the Japanese government over the unpopular presence on the island.

In a statement, the Navy said it had awarded an infrastructure contract worth about $US165 million ($US164.89 million) to the US firm Granite-Obayashi.

It would prepare a 400-acre site on Guam by building utilities, roads and other basic infrastructure for the future base, with construction proper due to start from 2020.

The Navy insists it would also include conservation measures for threatened and endangered species.

However, the relocation plan still had several hurdles to clear.

The military is being sued over its plans to use two islands in the nearby Northern Marianas as a bombing range, while Guam's governor, Eddie Calvo, in April withdrew his support for the buildup over an immigration dispute with the US government.