The People's National Congress party MP Job Pomat has been elected as the new speaker of Papua New Guinea's parliament.

He beat the other nominee for the position, Rabaul's Alan Marat, 60 votes to 46. 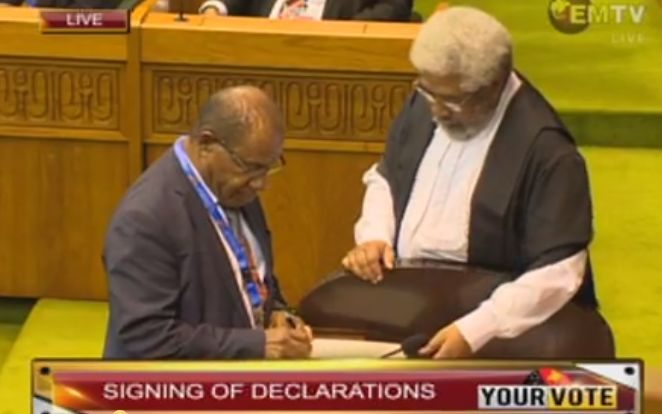 PNG politician Nick Kuman being sworn in as Gumine MP despite court order restraining him from being in parliament. 2 August 2017. Photo: EMTV Online

Mr Pomat's election as speaker indicates that his party leader Peter O'Neill is likely to be elected in the ensuring vote for prime minister to be held shortly.

There were scenes of chaos in Papua New Guinea's legislative chamber today as the start of tenth parliament sitting was held up due to another election controversy.

MPs-elect convened at the national legislature in Waigani this morning amidst heavy security for the respective votes for speaker of parliament and then prime minister.

However the sitting had barely begun when it came to an impasse after it emerged that two men in the chamber were claiming to be the MP-elect for the Gumine seat: Nick Kuman from the People's National Congress party, and Lucas Dekena of the PNG Party.

Mr Kuman was earlier confirmed by the Electoral Commission as Gumine's MP-elect, but due to challenges to the legality of the person who purported to be the Gumine returning officer when declaring him, the election result remains questionable.

The hold-up came when both Mr Kuman and Mr Dekena refused to vacate the chamber, prompting scenes of anger and confusion as dozens of MPs called for parliament to be adjourned.

Due to the fracas, the Chief Justice Sir Salamo Injia was initially prevented from swearing in the newly elected MPs.

The MP-elect for Sinasina-Yonggamugl Open, Kerenga Kua, was the most vocal, urging the Chief Justice to not allow parliament to proceed with lingering uncertainty over results in at least several seats.

Shouting across the chamber, Mr Kua said the chaos was a reflection of the inadequate performance of the Electoral Commissioner Patilias Gamato who presided over what has been described by many as PNG's most chaotic election yet.

After deliberations with the clerk of parliament, the swearing-in of MPs finally got underway about an hour behind schedule.

Despite the National Court having just granted an order to stop both Mr Kuman and Mr Dekena from participating in parliament today, the former proceeded to be sworn-in by the Chief Justice anyway.

The general public has been excluded from attending the highly-anticipated parliament session, where two main groups were vying to form the next coalition government.

The party which emerged with the most seats in the general election, the People's National Congress, was always expected to nominate leader Peter O'Neill to be prime minister again.

An opposing group known as the Alliance, based around the next two biggest parties - the National Alliance and the Pangu Pati - is to nominate its own candidate in due course.