Papua New Guinea's electoral commissioner has reversed a decision to have a number of ballot boxes discounted in North Waghi district.

A group of 28 candidates in the Jiwaka province electorate last week filed a petition disputing the fairness of polling at a polling place. 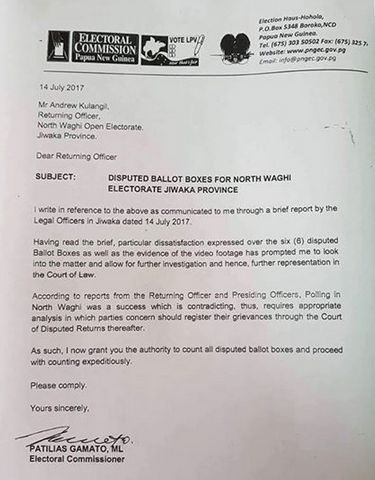 Video footage had emerged, appearing to show rampant mishandling of ballot papers by polling officials and other men at the Singirok Barracks polling place.

On Friday, the commissioner said he ordered the electorate's returning officer to set the six boxes in question aside as disputed boxes.

Patilias Gamato said he would direct a "thorough investigation into this incident to find out who was involved in making that decision to hijack the electoral process".

But now a letter from the commissioner has surfaced, directing the North Waghi returning officer to include the six boxes in the counting.

The letter is dated the same day as Mr Gamato's announcement to media about having the boxes set aside.

A spokesman for the Electoral Commission has confirmed Mr Gamato's decision, saying the decision to allow the boxes to be included in the count stems from advice from the solicitor general's office.

The spokesman said the situation on the ground in North Waghi is volatile, suggesting that there could be trouble if the boxes were set aside.

However he said the investigation flagged by Mr Gamato into the handling of the boxes would still proceed.