The Pacific is likely to see more teamwork involving China such as the Chinese-New Zealand partnership to pipe water around Rarotonga.

According to his research, about four percent of China's total aid spend goes to Oceania, most of that in soft loans for new roads and other infrastructure.

Mr Zhang said China was increasingly teaming up with traditional donor countries and agencies like the UN Development Programme and it saw the Pacific as a good testing ground for such co-operation.

"To me that is being small but being smart," he said.

China is also working with Australia on malaria diagnosis and research in Papua New Guinea.

Mr Zhang said when working with other partners to deliver aid to the region, China would likely focus on "less sensitive" sectors such as agriculture, public health and climate change.

He said big infrastructure projects were complicated and difficult to manage, compared to the smaller scale projects.

"This kind of trilateral partnership is not only good for the recipient countries but is also beneficial for Chinese global image building as a responsible global power."

China has been criticised in the past for aid and infrastructure unsuited to the region and there have been fears of growing indebtedness to Beijing via concessional loans.

Mr Zhang said China was interested in learning from traditional donors in areas such as project facilitation, monitoring and maintenance.

"It is very encouraging that the Chinese aid officials and also the researchers are showing more interest in this kind of engagement." 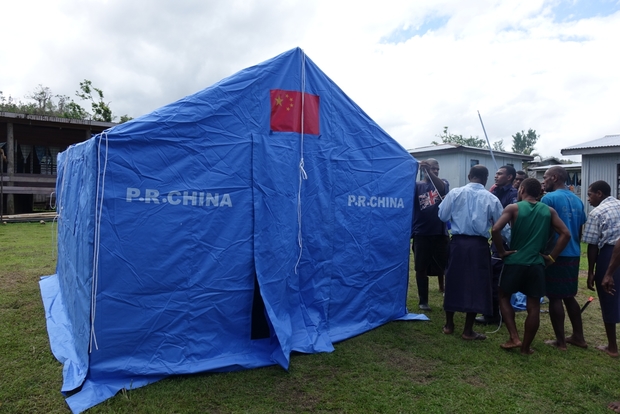 Tents donated by China were flown into villages in Fiji by the NZ Defence Force after Cyclone Winston. This one is in Nawaisomo village, Fiji. Photo: RNZI/Sally Round