Australia has secretly flown a sixth refugee from Nauru to Phnom Penh under Australia's controversial US$42 million dollar agreement with the Cambodian government. 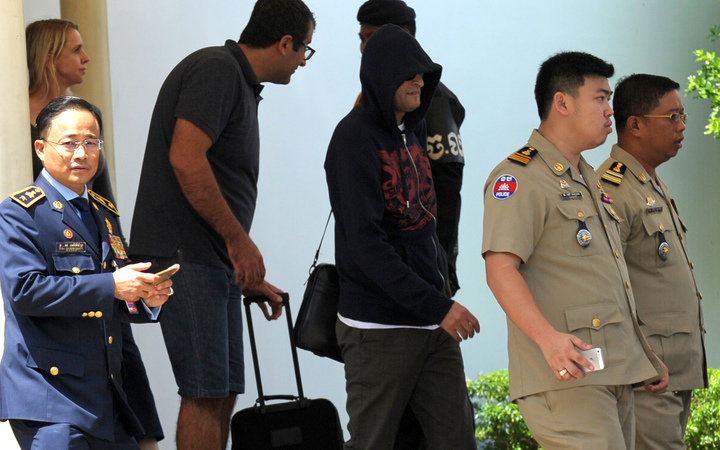 A refugee (3rd R) held under Australian custody in the Central Pacific island of Nauru is escorted by Cambodian police following his arrival at the Phnom Penh International airport on June 4, 2015. Cambodia received its first batch of asylum seekers from Australian custody on June 4 as part of a controversial deal between the two countries that has triggered widespread international criticism. Photo: TANG CHHIN SOTHY / AFP

The Sydney Morning Herald reported the Syrian man who arrived last Sunday was being cared for by the International Organisation for Migration, which has received millions of dollars from Australia to care for refugees in Cambodia.

But only one of the five other refugees who agreed to take a one-way flight from Nauru since the deal was signed two years ago remains in Cambodia.

Rohingya Muslim Mohammed Rashid, 26, told Fairfax Media in March that he felt abandoned and feared he would die in the country which admitted in April, it does not have the social programs to support the refugees.

Rashid has moved into a rented apartment and was receiving vocational training but has been unable to find a job.

The others - three Iranians and a Rohingya man from Myanmar - have returned to their countries.

Two more refugees on Nauru - one from Afghanistan and the other Pakistan - changed their minds at the last minute and decided not to take Sunday's flight to Phnom Penh after initially agreeing to the move.

The Turnbull government refuses to make public any details about the refugees who arrive in Cambodia, but the paper reports they are known to be promised cash payments, accommodation, training and loans to start up a small business.