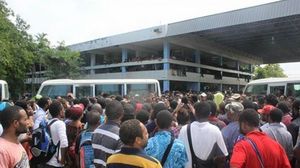 Thousands of students boycotted classes for weeks at the height of the protests. Photo: supplied

A Papua New Guinea court has granted an interim stay against the exclusion of seven student leaders from the University of PNG.

The members of the university's student representative council were permanently excluded last month.

They had led a weeks-long boycott of classes by thousands of students in protest against the prime minister Peter O'Neill's refusal to stand down from office to face corruption allegations.

Those protests turned violent in June, when police opened fire on students who were trying to march on parliament in support of an opposition motion of no confidence against Mr O'Neill.

But PNG Loop reports that on Friday, the Waigani National Court temporarily stayed the exclusion for two weeks to allow a judicial review to be filed and for respondents to be notified.

The matter will return before the court on the 20th of October.