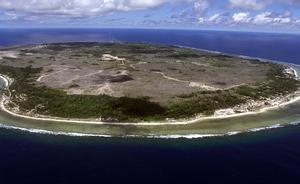 Australia has been in negotiations with several countries in a bid to move refugees out of its camps in Nauru. Photo: AFP

Under a law change being considered in Canberra, aslyum seekers in offshore Australian detention centres could face a lifetime ban on visiting Australia, according to media reports.

Australia's Channel 7 reports that Canberra plans to impose a lifetime ban on visiting Australia for the asylum seekers it has sent to its detention centres abroad.

The report said that would also apply to people who could become citizens of a country which might accept them as refugees.

The Australian government had earlier said that none of the refugees who sought asylum after arriving by boat would be granted access to Australia.

Australia has been in negotiations with several countries in a bid to move refugees out of its camps in Nauru and Papua New Guinea, but has refused to take up a limited resettlement offer from New Zealand.

In the previous decade, New Zealand accepted some of the people held by Australia abroad.

Some of them became New Zealand citizens who, under current arrangements, were allowed to move to Australia.