Fiji's trade minister has emphasised the trade imbalance it has with both Australia and New Zealand, in a bid to push more of its exports through those countries' ports. 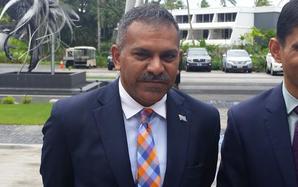 Faiyaz Koya said Fiji was the hub of the Pacific and was 'riding a wave of investment'.

Australasia trade accounted for 27 percent of Fiji's total trade last year, but there was far more potential to export to Australia and New Zealand in IT, manufacturing, mining and food processing, he said.