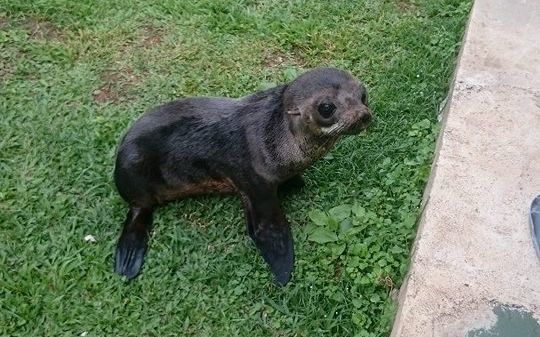 Last Saturday evening on Raivavae, a small volcanic island that juts out from the vast expanse of the eastern Pacific Ocean, residents made an unusual discovery on the edge of a road. A small baby sea lion, uncommon in the tropical waters of French Polynesia, had somehow made its way to this island of 940 people.

With no veterinarian on the island, the police and nurses were called and the sea lion was taken to the island's hospital where it was kept in a plastic swimming pool filled with salt water. The sea lion, which was named "Fox" by locals, was only 83cm long, weighed only 8 kg and had some injuries, local media reported.

Robson Tevitau, a resident on Raivavae, told Tahiti-Infos that locals tried to feed the sea lion fish but it refused. "The vet told us to give him a mixture of milk and eggs," he said. "We had to coax him, it was not easy to give. She did not understand what was happening." 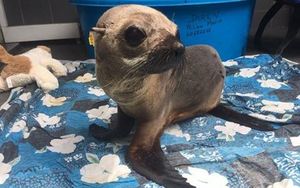 The sea lion, which has been named Fox, is now being cared for on the main island, Tahiti. Photo: French Polynesian environment directorate

On Monday, Fox was placed on a flight and transported by police from Raivavae to the main island, Tahiti, for treatment.

"This is a young sea lion who is thin and dehydrated," Olivier Betremieux, a veterinarian, told Tahiti-Infos. Mr Betremieux said the coming days would be crucial for Fox's survival. "We will have to make sure it's healthy and will gain weight by eating."

Sea lions are not a common sight in the warm, tropical waters of French Polynesia, and the mystery of how Fox managed to find its way to the Austral islands by itself has become the subject of widespread speculation in local media. Mr Betremieux said authorities were trying to determine where it came from, but there were three possibilities: The Galapgos Islands, South America, or, the most likely option, New Zealand - a journey of around 4,000km.

Mr Betremieux suspected that Fox had somehow become separated from its mother and swam the wrong way. "It is not weaned. Its mum had to be present with it but maybe she was attacked by sharks," he said.

Sabrina Birk, a Tahitian artist who is also a former journalist and politician, said Fox had become something of an overnight celebrity: "Many, many, many people have been following the news…and we have all been able to see him on TV - he's very cute - and everyone here is very concerned about this little sea lion," Ms Birk said in an interview.

"For us, he's like Tupaia, you know, he travelled the big ocean to come here - he's a great navigator, but he's Māori," said Ms Birk. 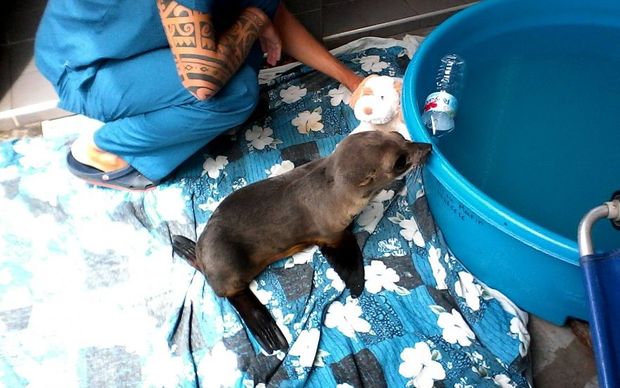 Where the sea lion came from has been the subject of much speculation in French Polynesia. It is suspected that it is from New Zealand, the Galapagos Islands, or South America. Photo: French Polynesian government

Mr Betremieux said that when Fox first arrived at his clinic on Tahiti, the sea lion was in poor condition and had to be fed through a gastric tube with a special blend for marine mammals. He said the goal was to bring the sea lion back to strength and have the sea lion eating live food independently. That could possibly involve sending it to somewhere more suited for dealing with sea lions, possibly New Zealand.

Ms Birk said that local fishermen had responded to calls put out on social media for live fish for Fox, and had flooded the clinic with donations.

In a statement, the French Polynesian government said the sea lion was being protected by the territory's environment directorate which was trying to organise the necessary care and for Fox's eventual repatriation. It also thanked the people of Raivavae for their efforts in saving Fox.