Australia is intentionally ignoring appalling human rights abuses against men, women and children being held in detention on Nauru, a new report from Human Rights Watch and Amnesty International says.

The report said Australia's offshore detention policy had resulted in the abuse of refugees and asylum seekers, which had been hidden behind a wall of secrecy. 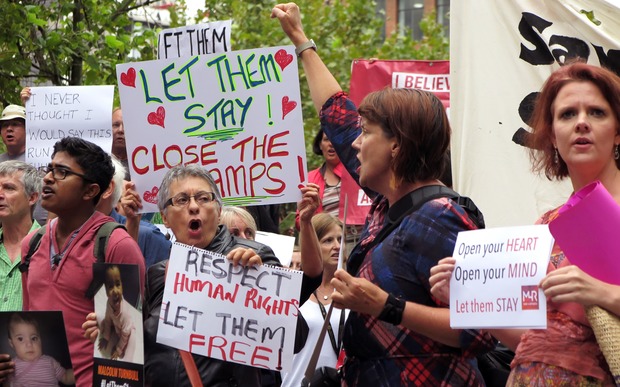 People hold up placards at a protest outside an immigration office in Sydney on 4 February. Photo: AFP

Under the policy, asylum seekers intercepted trying to reach Australia by boat are sent to camps - on Manus Island, in Papua New Guinea or in Nauru - which have drawn criticism for harsh conditions and reports of abuse.

Nauru, which charges foreign journalists $AU8000 for a visa application and restricts access to social networking sites such as Facebook, this year experienced a series of suicides and incidents of detainees hurting themselves in protests over their treatment.

The country in July allowed one researcher each from Amnesty International and Human Rights Watch to enter for 12 days, with the groups saying the researchers were not asked about their organisational affiliations when entering the country.

The researchers' report, based on interviews with 84 refugees and asylum seekers from Iran, Iraq, Pakistan, Somalia, Bangladesh, Kuwait and Afghanistan, as well as service providers at the Australian-funded facility, said that Canberra could not conceivably be unaware of the detention centre's shortcomings. 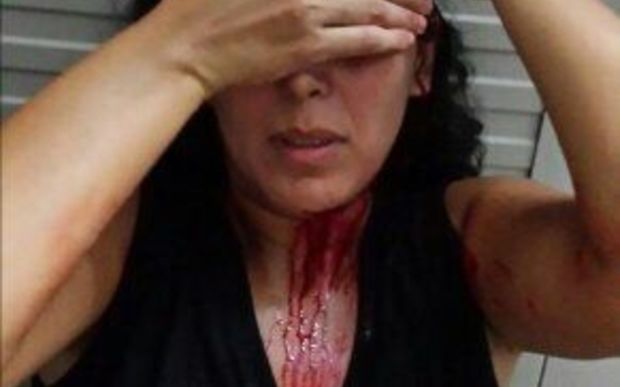 An image included in the report: Refugees and asylum seekers are frequently attacked on Nauru, the researchers said. Photo: Anna Neistat / Amnesty International

"The Australian government's failure to address serious abuses appears to be a deliberate policy to deter further asylum seekers from arriving in the country by boat," Human Rights Watch said in a statement accompanying the report.

Successive Australian governments have supported the policy, which they say is needed to stop people drowning at sea during dangerous boat journeys, which usually begin in Indonesia.

Human Rights Watch senior counsel Michael Bochenek, who was one of the two researchers that visited Nauru, said substandard housing and health conditions, coupled with hostility from the local population and an uncertain future, was causing serious damage to the mental and physical well-being of refugees and asylum seekers.

"They speak of children who have nightmares, who began to wet their beds, who began to stop interacting with other kids, stop playing, stop leaving their house, stop even talking," he told RNZ.

"These are all indications of a serious set of concerns for people's mental well-being that has a lot to do, that has everything to do with the context of which they have been held, the treatment that they have received and their prospects for the future."

He said claims that if not for its offshore policy Australia would be swamped by boat people do not add up and are misleading.

Mr Bochenek said if Australia was truly concerned about people setting out on long journeys on dangerous vessels it could take a more proactive approach to get the support of governments in transit countries like Indonesia, Thailand and Malaysia to offer adequate protection to refugees.

"They should concentrate on these concrete and positive measures first and abandon this failed and morally bankrupt policy of no advantage of stop the boats at all costs of banish people to distant destinations where daily life is an ordeal."

The interviewees described "prison-like" conditions, inadequate medical care, as well as physical and sexual assaults by residents of the area, said the other researcher, Amnesty senior director for research Anna Neistat.

"Australia's policy of exiling asylum seekers who arrive by boat is cruel in the extreme," she said in the report. "Few other countries go to such lengths to deliberately inflict suffering on people seeking safety and freedom."

Mr Bochenek called on Australia to reverse its refugee policy and end the offshore processing of asylum seekers and refugees.

A spokeswoman for Australia's Department of Immigration and Border Protection said it had not been consulted by Amnesty International regarding the report. She could not confirm if Human Rights Watch had attempted to contact the department.

"The department therefore has had no opportunity to inform itself of these claims and would strongly encourage Amnesty International to contact the department before airing allegations of this kind," she told Reuters.

Broadspectrum, which runs the facility, and International Health and Medical Services, the main medical service provider, rejected the allegations when asked for comment, the human rights groups said. 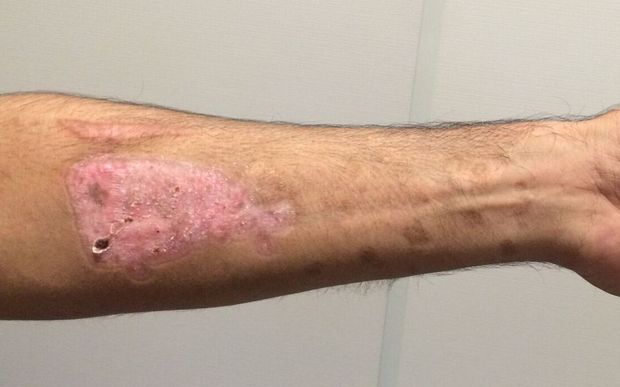 An injury reportedly suffered by a refugee in Nauru, and included in the human rights groups' report Photo: Anna Neistat / Amnesty International