Peter O'Neill has this week on a state visit to China where he met with Chinese President Xi Jinping. 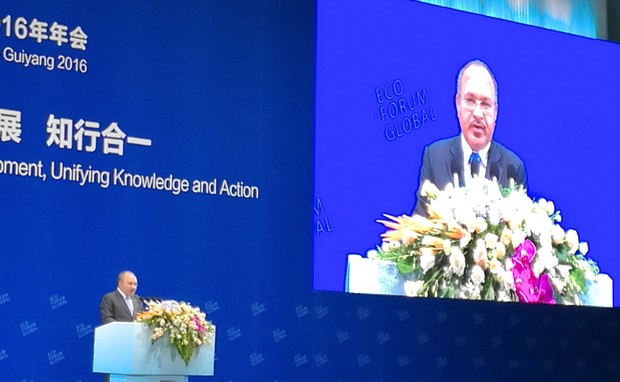 A resulting joint press release asserted China's "legitimate and lawful rights and interest in the South China Sea, and its right to independently choose the means of dispute settlement in accordance with law"

It said PNG respected China's position and upheld that maritime disputes in the region should be peacefully resolved through consultation between parties directly concerned, under international law.

Pacific countries have been part of the focus of a diplomatic and publicity blitz by China to rally support for its sweeping maritime claims in the South China Sea.

In May, Vanuatu's government issued a statement saying it understood and supported China's position.

Meanwhile, PNG and China have agreed on co-operation in a number of areas such as trade, investment, agriculture, forestry, fishery, energy, tourism and to strengthen cooperation in mineral exploration.

While addressing the conference, he extended sympathies to China following devastating floods over the past week that have claimed hundreds of lives.

"This disaster in China is a current and very real example of the damage caused when we allow the climate of our planet to change, and is another wakeup call for all of us around the world," he said.

"We have to step up our efforts to bring about a green development revolution, to unify our knowledge and to take action together.

"If we do not do this, the world we leave for our children will be in a very sad state."

The PNG prime minister has committed his government to being part of China's efforts to strengthen its development of a "Maritime Silk Road' trade route system across the Asia Pacific region.