Tahiti came from two goals and a man down to force a 2-2 draw with Papua New Guinea, whiel New Caledonia went top of Group A at the Oceania Nations Cup in Port Moresby.

Raymond Gunemba pounced on a mistake by Tahiti keeper Michael Roche to put the home side in front seconds before halftime at Sir John Guise Stadium.

They soon had an extra man when Tahiti skipper Nicolas Vallar was sent off for a challenge on the goalscorer six minutes into the second spell. 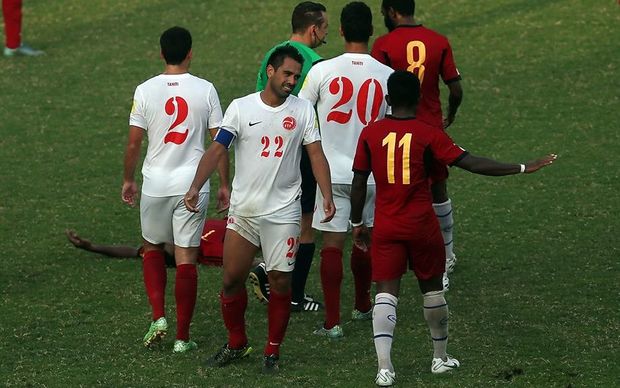 Tahiti's Nicolas Vallar is sent off for a challenge on PNG's Raymond Gunemba. Photo: OFC via Phototek

Gunemba made it 2-0 in the 64th minute and PNG appeared to be coasting to victory.

But Alvin Tehau pulled a goal back for the reigning champions two minutes later before completing their comeback ten minutes later when Teaonui Tehau scored from inside the box, as the PNG defence failed to clear an incoming corner. 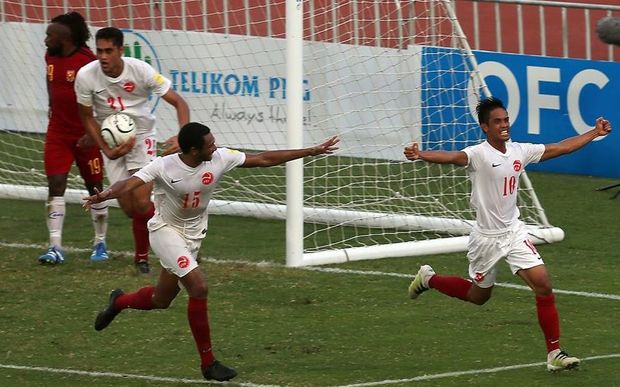 Tahiti coach Ludovic Graugnard heaped praise on his players for their efforts.

"I have to congratulate the boys, it took a lot of psychological and mental strength to come from two goals down. So I am very satisfied with what we managed to do on the field tonight," Graugnard said.

"Ten against 11 is hard but despite that we did everything we could to try and win the match and coming from behind with a man down shows that we are tougher mentally than our adversaries."

PNG coach Flemming Serritslev said his team should have closed the game out.

"We are very disappointed...it was terrible because before we had more chances to go three or four zero (ahead). We had been defending corner kicks very good, especially in the first half where we had conceded three or four corner kicks in a row but we were very safe. Unfortunately there was a lack of concentration at the end of the game." 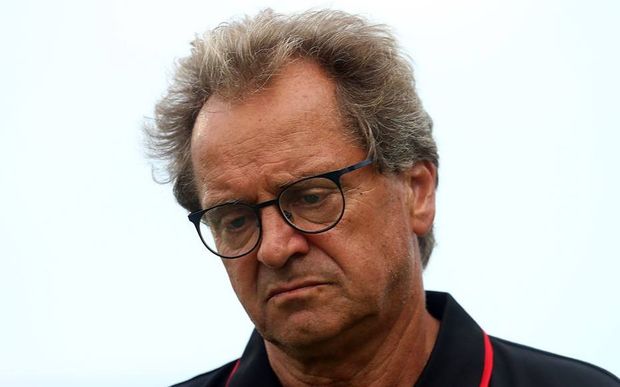 In the late game, New Caledonia thumped Samoa 7-0 to go top of Group A on goal difference.

Karaya grabbed his second and Cesar Zeoula converted from the spot to make it 4-0 at halftime. 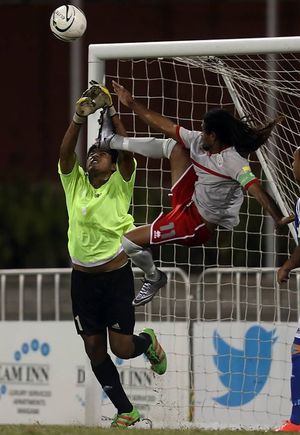 New Caledonia coach Thierry Sardo said it was important for his side to record a big win against Samoa.

"We knew we needed to score more goals than Tahiti for the goal difference. Our first objective was to qualify for the next phase of the World Cup qualifiers. We've done that now and so we will focus on trying to progress to the semi-finals."

Samoa coach Scott Easthope lamented his players' lack of concentration, especially in the first half.

"We have some mental lapses early in the game particularly in the first half and just get punished by sides who are being a lot more clinical than we are at the moment."

New Caledonia only need a draw against French Polynesian rivals Tahiti in Sunday's final group round to progress to the semi finals, while Papua New Guinea need to beat Samoa by five or more goals to be assured of a spot in the knockout rounds.