"I have the energy, the passion to speak out, but it always makes me cry to talk about my people. We're not talking about polar bears. We have to look after the survival of our people," she said.

She was among several Pacific island young people telling their stories at the "In the Eye of the Storm" Pacific climate change conference at Wellington's Victoria University this week. 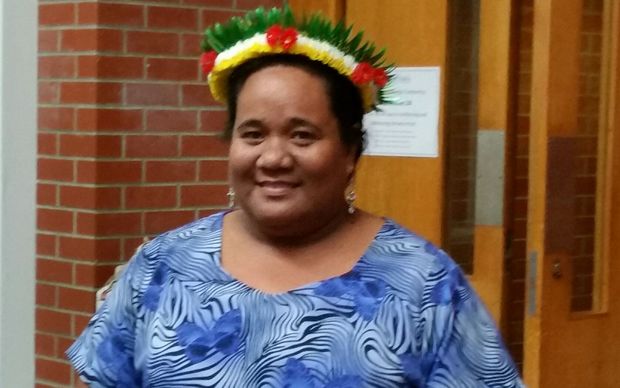 Delegates heard calls for support, compassion and a change of mindset from decision-makers and polluters.

Ms Anterea said many Kiribati people are upskilling so they won't be a burden on other countries if they do have to leave their homeland.

The president of the low lying nation Anote Tong, who opened the conference, said his country has seen an accelerated rate of sea level rise, storm surges and changes in climate.

"People are getting quite scared now and we need immediate solutions. This is why I want to rush the solutions so there will be a sense of comfort for our people. They can sleep even when the tide is high," said Mr Tong. 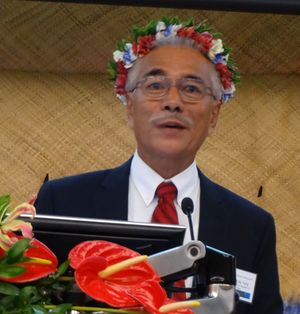 He said he has also been motivating the country's 100,000 strong population to prepare and adapt themselves for what he calls migration with dignity.

Claire Anterea said the young people of Kiribati are taking up the education opportunities, training in skills like carpentry and nursing.

She said she also tries to persuade people not to buy imported goods as a way of stopping the problem at its source.

"If we show we don't need (the goods), then the factories will stop producing them."

Mary-Linda Salvador, from Pohnpei in the Federated States of Micronesia, said climate change is not only affecting livelihoods in her islands, but also culture and traditions.

"The chiefs they get fed up with waiting for the crops to come, or the fish to come and if they don't come then what's the point of hosting a celebration where there's nothing to celebrate? It's part of our culture that we're losing. That's part of our legacy that probably our children won't be able to experience," she said. 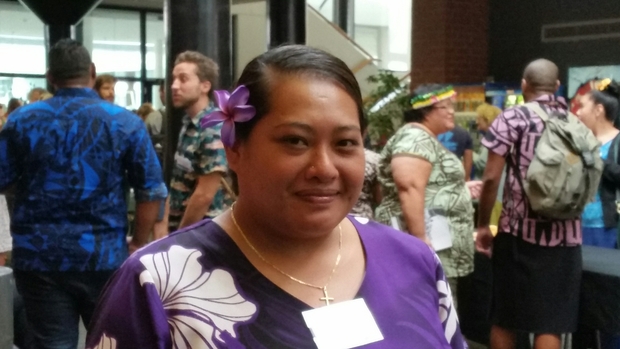 Ms Salvador said rivers are drying up and there are fewer fish around the reefs, but she said the locals are acting by planting trees and establishing marine and mangrove protection zones.

"We're not sitting back and saying OK we're just going to see what happens. We're taking the next step and taking responsibility and trying to keep the legacy, the culture, our home."

Nauru's Nerida Ann Hubert told a panel discussion at the conference people would be outraged if they had to migrate from Nauru because of the effects of climate change.

She said it is unclear whether coastal erosion is due to sea level rise or new developments by the sea.

She said there is a need for more analysis.

Lack of skills in Nauru

Ms Hubert said the locals think the government should be doing its best to keep people in situ but she pointed out a brain drain and previous hard economic times mean there is a generation of people who lack skills to help put climate change adaptation projects into practice.

She said the same group of volunteers end up doing all the work.

"Give them that education they need. Like we had a lot of projects that started off and then died you know and no one maintained it and we need to empower the people really."

She gave the example of a renewable energy plan which has stalled because of a lack of trained locals.

"The government knows what they're doing on an international level, or a regional level. They sign this and that. But down the scale not a lot of people know what climate change is. It's the people that will be the manpower to do a lot of this work. You need to bring the communities on board," said Ms Hubert. 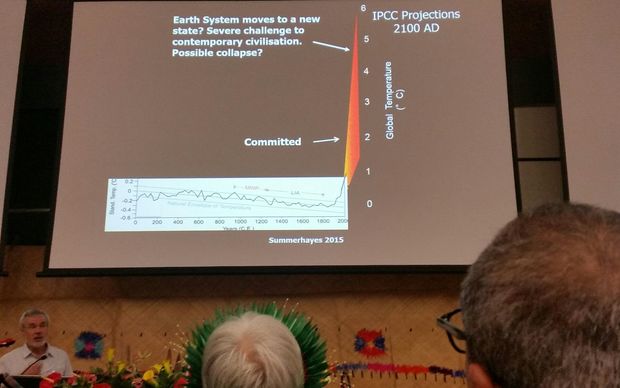 Delegates at the "In the Eye of the Storm" Pacific climate change conference take in the science of climate change. Photo: RNZI / Sally Round

Ms Hubert encouraged NGOs and regional bodies to consult local people when they came into the country with climate change projects.

An environmental and indigenous rights lawyer, Dayle Takitimu, said Pacific communities can model to the world a "zero emissions" lifestyle.

She said they are, at the most, two generations away from living in harmony with the earth.

"It is possible to be vibrant and beautiful and thriving as a community without having to be massive emitters of carbon and destroying the planet. And the Pacific is really an awesome model for that and we can show the world that." 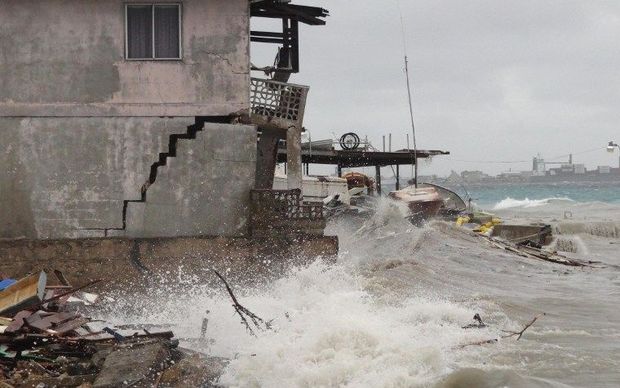