The abundance of warm waters in the Pacific is one reason why Cyclone Winston is predicted to turn and impact Tonga and Fiji for a second time. 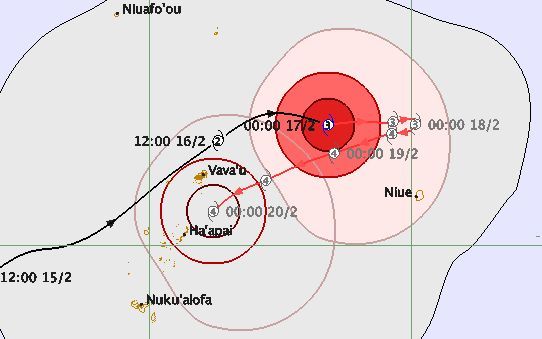 "Well one of the reasons why is just because of El Niño, there are larger area of warmer than normal sea surface temperatures in the Pacific and you need to have warm water, at least 26.5 degrees, to have tropical cyclones.

"And when you've got a bigger pool, they've just got more places to go."

Mr Fedaeff said the Pacific Decadal Oscillation pattern was also in a negative phase, meaning warmer than usual waters in the Western Pacific.

Tonga's disaster management office is Thursday morning dispatching a team to fly to the Vava'u Group to assess the damage caused by Cyclone Winston.

The category three storm came close to Vava'u overnight and is now tracking eastwards on a path that may take it between Tonga's far northern Niuas and neighbouring Niue.

The disaster office has already received reports of damage on Vava'u with trees and power down, obstructions on the airport runway, roads blocked and some houses having lost roofs.

Winston now has average speeds of 130 kilometres with momentary gusts of up to 185 kilometres an hour.

Earlier, a prediction from the Tropical Cyclone Warning Centre advised that Winston was likely to spin sharply in a reverse direction, increasing in intensity and possibly threatening Vava'u and/or Ha'apai for a second time.

Early this morning, Winston was lying about 240 kilometres northwest of Niue.

A gale warning remains in force for Niue.

The island is on blue alert, which means only emergency staff are working.

Niue MP, Terry Coe said last night was very windy but not enough to cause too much damage.

But he said locals are waiting to see where Winston goes next.

"The cyclone is going up past Niue, virtually towards the Cooks but it won't reach the Cooks probably be closer to Pago Pago and then its turning to come back down and we will just have to wait and see where that turn is going to take place and whether it's going to end up coming back closer to Niue."