A former aide to two former prime ministers in Fiji says he is concerned about returning to the country after receiving an apparent threat from Fiji's acting police chief via Facebook.

Shailendra Raju said on Monday afternoon he received an abusive message from the account of Sitiveni Qiliho who is Fiji's acting Police Commissioner following Mr Raju's highlighting of police inaction over several investigations in the country. 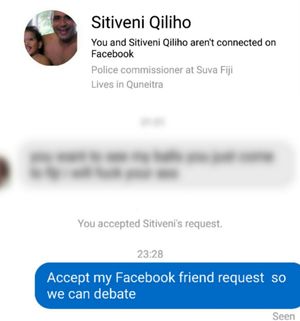 Mr Raju said he would alert the Constitutional Offices Commission which was due to consider Mr Qiliho's application for the permanent police chief role.

"It's a very short message but obviously very rude, unprofessional and completely unbecoming of an acting police commissioner. And it's quite disturbing for me personally because I haven't been to Fiji for five years. This threat just confirms that should I enter Fiji, anything could happen."

Shailendra Raju said he had to reconsider plans to visit Fiji because he did not believe it was safe for the government's critics.

The Fiji police force has been contacted for comment.