Russia says the arms sent to Fiji this month will be used to boost the efficiency of Fiji troops serving with the United Nations.

The foreign ministry in Moscow said a batch of small arms and munitions was supplied at Fiji's official request and would used by its mechanised infantry battalion which was part of the United Nations Disengagement Observer Force deployed in the Golan Heights.

When the shipment arrived in Suva, the Fiji Labour Party said it was a secret deal while the parliamentary opposition said the transaction was illegal because it did not go through parliament for approval.

The opposition also alleged that police were barred from providing security for the weapons transfer from the port to the barracks which was provided by a contracted private firm.

A Russian foreign ministry spokeswoman said an official handover of the consignment would take place in February.

She also said Russia would expand comprehensive practical cooperation with Fiji and other South Pacific states, including in the military technical sphere.

She said such cooperation was not meant to interfere in their domestic affairs and was not aimed against third countries. 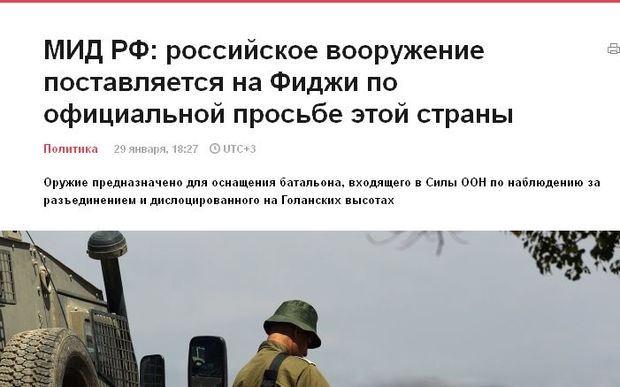