Disaster authorities in Papua New Guinea are concerned at new evidence pointing to an increase in drought-related deaths among young adults. 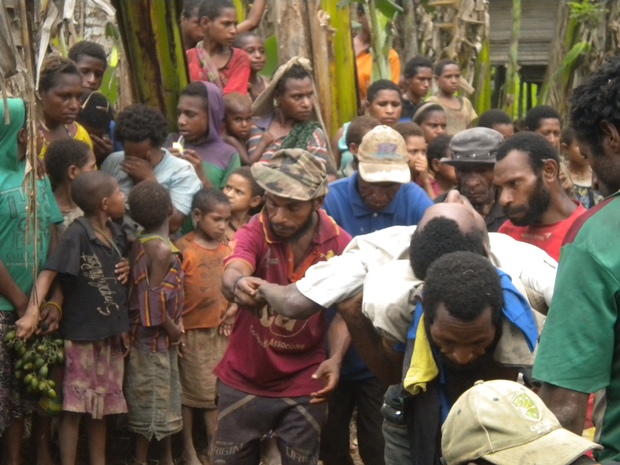 A husband and father is carried to his grave after dying in the bush when he went to make sago. He was hungry and weak and trying to feed his family. Photo: RNZI / courtesy of Sally Lloyd

A specialist in PNG agriculture says recent photographic evidence indicates things are getting worse in the country's remote communities.

Mike Bourke, who has just returned to Australia, says this stems from a combination of drought related factors including reduced nutrition and an increased disease burden with people having to work twice as hard to find food.

"Adults are dying who don't normally die people in their 20's and 30's there is clearly an increase in death rate amongst very small children. So we don't have really hard data we don't have lots of good demographic data but the evidence(Photographic) coming in is credible. It may not be tens of thousands of people over all but for the groups and communities involved it is a huge tragedy."

Mr Bourke says accessibility is by far the biggest issue hampering efforts to get relief aid out to communities in the Western Province, Milne Bay and remote areas of the Highlands region.

He has been assisting local authorities, churches and the Australian government with getting accurate information about the situation.