Excitement is building in Samoa where the heavyweight boxer Joseph Parker fights America's Jason Bergman in Apia on Saturday. 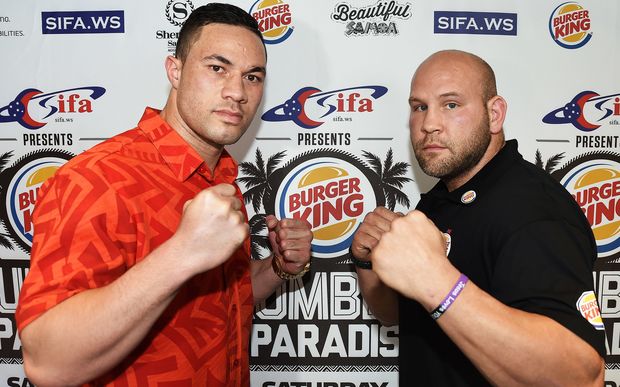 Joseph Parker and Jason Bergman square off ahead of their "Rumble in Paradise" fight in Apia. Photo: PHOTOSPORT

Parker, a 24-year-old Samoan New Zealander, has never been beaten in 16 professional bouts, while the 31-year-old Bergcamp has won 16 of his last 18 fights.

RNZ International's correspondent in Apia, Autagavaia Tipi Autagavaia, says villagers have decorated the road from the airport to the capital to celebrate Parker's first fight in Samoa.

"Yesterday he visited Tuanaimato gym one where the boxing ring is for the event on Saturday and there was quite a number of young people there at the gym watching him train. That shows quite a lot of excitement from our people here."

Autagavaia says a parade will be held in Apia on Friday when the boxers are weighed in.