Vanuatu's president has appointed former attorney general, Ishmael Kalsakau, to act as his lawyer in a legal challenge against his decision to dissolve parliament. 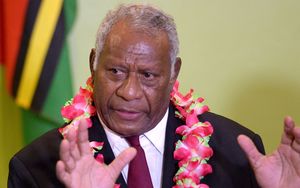 Yesterday, Justice Dudley Aru was forced to adjourn the challenge twice because president Baldwin Lonsdale had failed to find a lawyer to represent him.

Justice Aru had ordered the president to find a lawyer by two o'clock this afternoon, which was when Mr Kalsakau presented himself to say that he had been hired as the president's lawyer.

24 former opposition MPs are challenging the dissolution of parliament, which the president decided to do after MPs failed to resolve a weeks long political impasse.

Justice Aru has given the lawyers for the MPs and Father Lonsdale until 4 o'clock on Wednesday afternoon to submit their cases, and set December the 10th as the date for the hearings.