Australia's government is refusing to comment on reports that it is considering resettling refugees detained in Nauru and Papua New Guinea in the central Asian country of Kyrgyzstan. 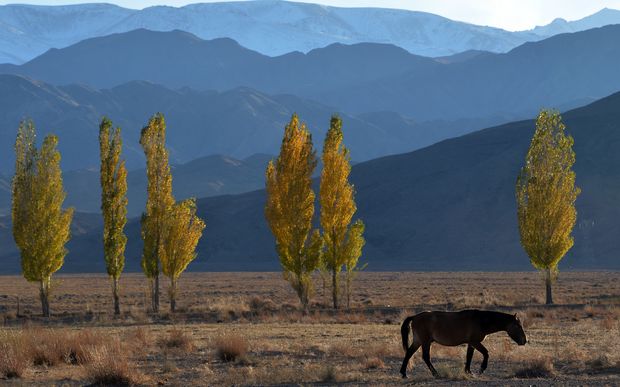 A mountainous, landlocked country of roughly six million people, Kyrgyzstan could be home to refugees who had originally sought to settle in Australia. Photo: AFP

The Australian reported that the country was on a list of nations Canberra was considering sending refugees to.

It said other former Soviet republics were also being considered for resettlement, but no deals had yet been struck.

Australia's finance minister Mathias Cormann refused to confirm or deny the reports in an interview with Sky News, saying the government was speaking with a number of countries regarding resettlement, and would not comment until it was "in a position to do so".

Asylum seekers who attempt to reach Australia are transferred to Canberra-run detention centres in Nauru and on Papua New Guinea's Manus Island, from where they will be resettled in another country if they're found to be refugees.

But Canberra has struggled to find a solution to its hard-line policy, with people languishing for years in the detention centres in conditions that have been heavily criticised by human rights groups and the United Nations.

A deal with Cambodia signed last year has only resettled four refugees at a cost of US$38 million, while negotiations with the Philippines collapsed earlier this month.

A landlocked, mountainous country of roughly six million people, Kyrgyzstan has struggled to develop since it gained independence in the breakup of the Soviet Union in 1991. Its people are among the world's poorest, with the World Bank recording a GDP per capita of US$1,263.

Resentment at the country's widespread poverty and ethnic divisions have at times spilled over into violent clashes, and the country's first two presidents were overthrown by popular dissent.

Kyrgyzstan has been criticised by a number of international NGOs over its human rights record, with Human Rights Watch saying violence against women and lesbian, gay, bisexual and transgender people remained pervasive. It said freedom of expression and assembly have also suffered recent setbacks.

It also said impunity for torture, violent physical and verbal attacks, and harassment of NGOs and media was common.

The country ranks 136th out of 175 countries in Transparency International's Corruption Perceptions Index.

However, it was a signatory to the 1951 United Nations Convention on the Status of Refugees.

Australia's Department of Foreign Affairs and Trade advises Australians visiting Kyrgyzstan to exercise a high degree of caution due to the potential for civil unrest, the threat of terrorism and high levels of crime.