The Australian Immigration Minister, Peter Dutton, has not ruled out allowing a pregnant asylum seeker on Nauru return to Australia, as long as it's not for migration purposes. 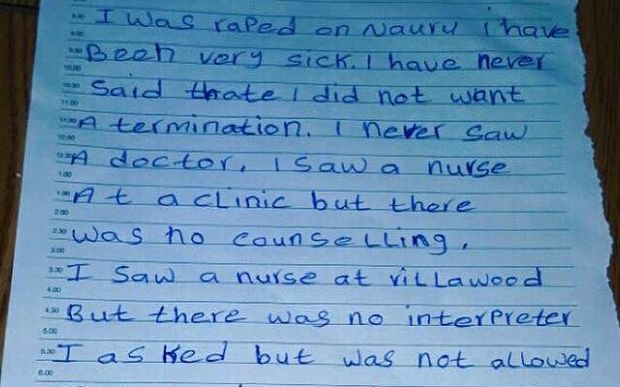 A handwritten note from a Somalian refugee in Nauru, who has become pregnant after being allegedly raped, and is seeking a termination in Australia. Photo: Facebook / Change.org

The Somali woman, who says she was raped, was sent to Australia for a termination because abortion is illegal on the island, but the Australian government secretly flew the 23-year-old back to Nauru on Friday without the abortion having taken place.

Peter Dutton told the ABC the woman was seen by medical professionals, including a primary healthcare nurse, a mental health nurse, and a doctor on a number of occasions, with an interpreter there for most of those visits.

Mr Dutton says the woman had changed her mind, and was sent back because she had been allowed in for medical attention only.

"We've demonstrated that we were to provide support, that we were in a position to provide support, we did. We provided that support, we allowed the lady, facilitated a number of visits to health professionals. After the health professionals consulted with the lady, the lady made a decision and she was sent back to Nauru. That's as clear as I can be in relation to this matter."

Her lawyers and refugee advocates deny this, saying the woman wanted more time to decide and to seek counselling.

A letter the woman gave to her lawyer George Newhouse states that she never saw a doctor, and that she has never said that she did not want a termination.

When asked on ABC national radio if the woman could come back to Australia, Mr Dutton says a decision will be made in the best interests of the person.

Meanwhile, Australia's immigration department has defended its handling of the refugee

At a Senate Committee hearing in Canberra yesterday, the immigration department's first secretary for detention services, Neil Skill, said the woman was seen by both doctors and mental health nurses and made it clear she did not want the abortion.

He says the decision was then made to charter the plane to Nauru, via Honiara, because she was deemed a risk on a commercial flight.