The prime minister, Sato Kilman, says he cannot make a comment about last weekend's mass pardoning of MPs until a final decision is taken by the judiciary or the head of state. 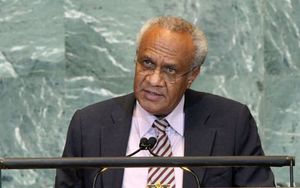 The government statement is the first response since the pardons.

The statement says the prime minister is still reserving his position because he has been advised that the defense counsels are to appeal against the conviction.

None of those pardoned, who include the deputy prime minister Moana Carcasses, have themselves suggested that they will appeal against their conviction since they were pardoned.

The mass pardon has been widely condemned amid suggestions that it might be overturned, with the opposition seeking a vote of no confidence on Wednesday - a day before the pardoned MPs were due to be sentenced.

The government statement says Mr Kilman had to cancel a trip to Tanna on Wednesday for security reasons.

It also urges the opposition to appeal to those using social media to stop making mountains out of molehills.

The Opposition has been rallying support for a vote of no confidence in the Sato Kilman-led administration amid a political crisis triggered by last weekend's pardon of 14 convicted MPs.

He says a ruling on the motion is still to come from the Speaker Marcellino Pipite who pardoned himself and the other 13 convicted MPs last weekend.

"We'll leave it for the Speaker to declare it in order. He's probably going to rule it out of order. We definitely do have the majority of numbers in Parliament now as a result of people who signed the motion so we'll continue to pursue avenues to get rid of the government which is full of criminals at the moment."