Hosts Papua New Guinea have claimed more gold at the Pacific Games in Port Moresby after cruising past Samoa 38-10 in the rugby league final. 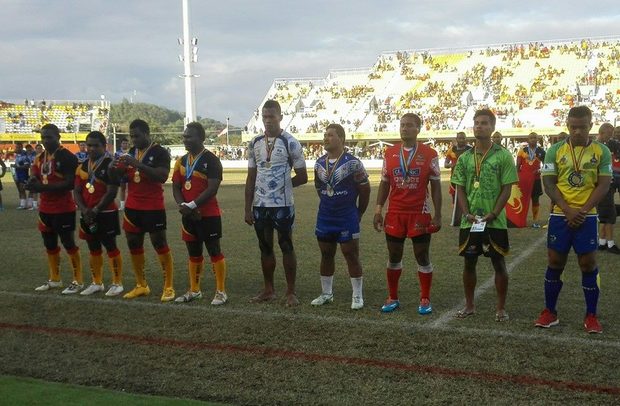 Oti Bland Tony and Wartovo Puara Junior scored two tries apiece, with the latter picking up the player of the tournament award.

The hosts, with a team mostly made up of players from the top domestic side the PNG Hunters, were unbeaten through seven matches throughout the competition.

New Caledonia wrapped up a dominant display in the water with back to back gold medals in the ocean swim.

The race had been reduced from five to three kilometres after the start was delayed by nearly three hours, by which time the tide on Loloata Island had gone out.

Robin finished the Games with five medals, including three gold, while for Mary it was an extra special occasion.

"The men of New Caledonia don't have a gold medal [in the water] - it's the first - and I'm just very happy. [It was] so difficult - the condition is very bad but I'm first so it's ok," he said.

The French territory was typically dominant in the water, having also claimed 19 of 40 gold medals in the pool at Taurama.

Samoa's gold medal performance in the women's cricket final has been labelled the biggest achievement in the country's cricketing history.

Having set Papua New Guinea 104 to win in wet conditions at the Bisini Sports Complex, the hosts collapsed from 37 without loss to be 58 for 5.

Needing 32 off the final four overs, the Lewas got desperate and lost three more wickets to run-outs before eventually finishing four runs shy of victory.

It was Samoas first win ever against PNG and coach Ian West said it was the biggest result in their history.

"We're just an affiliate nation [and] we're up against all these associate nations," he said.

"I was absolutely cursing at the start of the second innings and then they got off to a flying start [but the] girls just fought back, never gave up and I couldn't ask for any more."

Ian West said Samoa cricket had been living on potential for a long time but this showed they can beat anyone in the region.