The premier of Niue says the first full history on the colonial era on the island will be the second most important book there, after the Bible.

Toke Talagi was speaking at the launch last night in Wellington of Margaret Pointer's 'Niue 1774 - 1974, 200 years of Contact and Change' 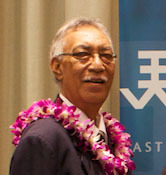 Mr Talagi says while it is a European version of Niuean history this does not matter as the island discovered after it started its Taonga Niue cultural division ten years ago.

He says there was debate then as to which version of history is the right one.

"In the end we decided that nobody was right and nobody was wrong because everyone has there own perspectives about history and time changes things for all of us."