A Papua New Guinea union says it will make a complaint to the Ombudsman Commission over the actions of the Parliament Speaker, which they say infringes upon people's constitutional rights. 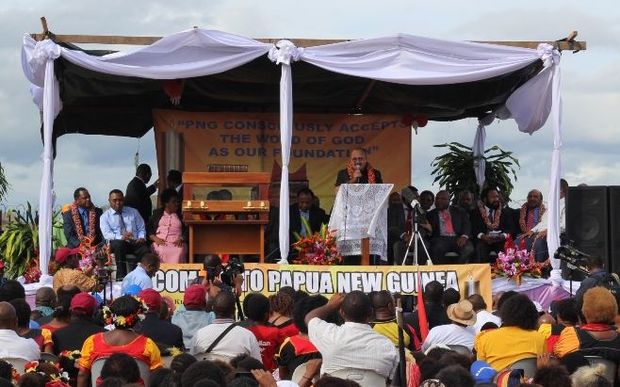 Papua New Guinea's Prime Minister Peter O'Neill speaks at a reception for a first edition of the King James Bible given to PNG by a private US donor. Photo: Supplied

Theodore Zurenuoc led a delegation to the US to collect a 404-year-old Bible but the PNG Trade Union Congress says the more than $US26,000 of tax payers money used to fund the trip is inappropriate.

Mr Paska says the actions is also counter to the constitution.

"The essence of our issue remains this; he has misused public funds to pursue religious beliefs which violate constitutional rights in terms of freedom of religion and he must be taken to task on this."

Mr Paska says Mr Zurenuoc and MPs William Powi, Anton Yagama, De Kewanu and Tobias Kulang, who were part of the nine-person official delegation, will be referred to the Ombudsman Commission.