Vanuatu's foreign minister Sato Kilman has reportedly indicated that his government is to open an embassy in Indonesia's capital.

Mr Kilman confirmed this to local media while in Jakarta for this week's Asia-Africa Conference, a gathering of 77 countries for discussions on development and co-operation programmes between developing countries. 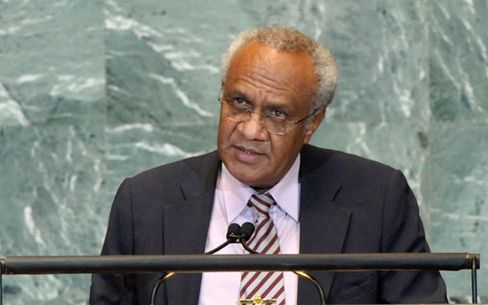 He said that the opening of an embassy would happen as soon as possible and strengthen co-operation between the two countries.

Due to Vanuatu's long-held support for West Papuan independence, its government relations with Indonesia were previously remote.

Mr Kilman was prime minister of Vanuatu in 2012 when the government controversially forged an initial co-operation agreement with Jakarta, although subsequent configurations of government stepped back from closer links.

He denied that the assistance would have any bearing on Vanuatu support for the West Papuan bid to become a member of the Melanesian Spearhead Group at which Indonesia has observer status.

Meanwhile, after meeting with Mr Kilman in Jakarta, Indonesia's foreign minister Retno Marsudi has placed the closer links with Vanuatu as part of Jakarta's overall outreach to Melanesian states.

She says Indonesia's Melanesian population is greater than the population of other Melanesian countries combined, making her country an integral part of Melanesia.

To promote its Melanesian links, Ms Marsudi said that Indonesia plans to host a major Melanesian culture and arts event in October