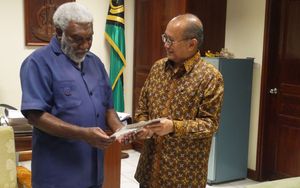 While acknowledging the cordial relationship between Vanuatu and Indonesia, Prime Mr Natuman reminded the visiting Indonesian Ambassador to Vanuatu Nadjib Riphat Kesoema of Vanuatu's firm position in support of the West Papuan struggle.

The Prime Minister says while there are clear disagreements between the two countries, Vanuatu and Indonesia should be able to discuss sensitive issues in an amicable way and find the best way forward.

Mr Natuman took the opportunity to inform the Indonesian ambassador of forum planned for Port Vila later this month at which various West Papuan groups will converge to discuss a potential bid to join the Melanesian Spearhead Group.

Ambassador Kesoema says the needs of the indigenous people of West Papua are being taken into account as the country continues its democratisation.