A refugee advocate says asylum seekers on Papua New Guinea's Manus Island have been banned from using a phone and talking to their case workers.

This comes following a week unrest at the centre over plans to resettle asylum seekers on the island and conflicting accounts over whether force was used to end the protests.

Ian Rintoul of the Refugee Action Coalition said 734 detainees remain on hunger strike and many are angry at suggestions that everything was calm.

He provided a letter from protestors in Foxtrot Compound declaring their protest would continue.

More on this month's protests at Manus Island

Mr Rintoul said three people collapsed yesterday and 11 were rounded up to add to ten held in an isolation unit. 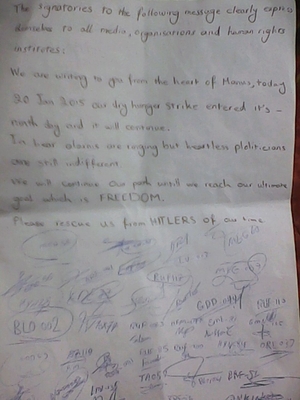 Mr Rintoul said on top of the hunger strike, the authorities have now placed a ban on using the welfare phone in one compound.

He blamed the protests at the centre on refugee advocates, who he said had been stoking unrest and interfering in the resettlement process by spreading propaganda about resettlement in Papua New Guinea to asylum seekers.

He said communications restrictions could be implemented as a result.

"Nobody has access to the centre except the Papua New Guinea and the Australian government, so with the internet and all the other access that is available, they're directly linking with the asylum seekers," Mr Pato said.

"How we can control that information is also being addressed by the Australian government and the Papua New Guinea government so that [the asylum seekers] will get correct information that is in their best interests."

The government of both Australia and Papua New Guinea were on Tuesday playing down the extent of the protests, which had been going for a week when guards entered the detention centre compound on Monday night.

However, conflicting accounts have emerged about how the protests came to an end.

Mr Pato said his chief migration officer, Mataio Rabura, flew from the capital Port Moresby on Monday to negotiate the end of the blockade.

The minister said Mr Rabura explained the resettlement process agreed between Canberra and Port Moresby and promised asylum seekers that those found to be refugees would be resettled.

"All I can say to you is that order has been restored, everything is under control and there was peace and calm," Mr Pato told Radio New Zealand International.

"The chief migration officer, because of the relative calmness of the situation, is returning as we speak."

But this version of events was disputed by Ian Rintoul, the head of the Australia-based Refugee Action Coalition, who said that guards forcibly entered the compound and detained a number of people in order to end the blockade.

"There is no doubt that physical force was used," Mr Rintoul said.

"People across the road in Oscar [Compound] could see people being handcuffed and dragged across the ground." 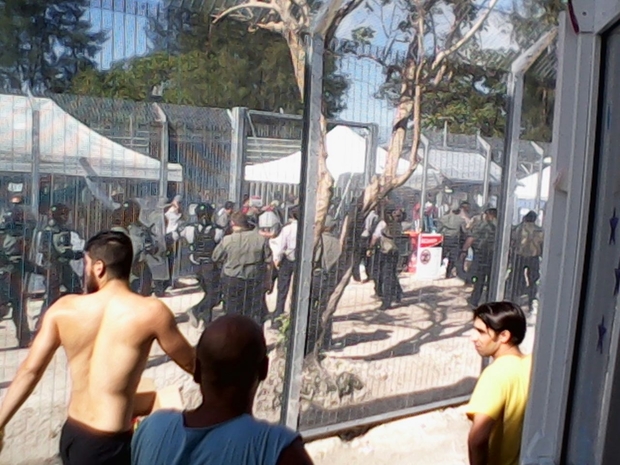 A video obtained by Radio New Zealand International appeared to show guards in helmets and carrying riot shields entering the compound. Screaming, shouting and thumping can then be heard.

Mr Rintoul said 58 people had been detained in a prison in the provincial capital, Lorengau, while other detainees have been transferred to an isolation unit located within the centre.

Both Papua New Guinea police and the camp's operator, Transfield Services, did not respond to requests for comment.

'What we see are men at breaking point'

Mr Karapanagiotidis said he feared the protests would again spill over into bloodshed, as happened last February when a 24-year-old Iranian asylum seeker, Reza Barati, was killed in a violent crackdown on unrest at the centre.

"Australia has killed more refugees than it has resettled in two years," Mr Karapanagiotidis said.

"What we see are men at breaking point which led to about 750 going on hunger strike, over 100 needing medical attention because of dehydration and hunger strike and then up to 58 in prison today for peacefully protesting their indefinite detention in squalid conditions."

Mr Pato confirmed that asylum seekers had been moved to isolation although he did not have an exact number.

However, Mr Karapanagiotidis blamed the uncertainty asylum seekers faced for the unrest.

He said that the detention centre had been open for two years and not a single asylum seeker had been resettled. 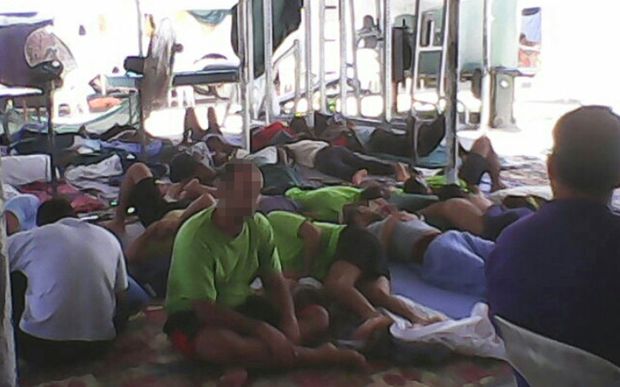