Hundreds of asylum seekers are refusing to return to their compounds as they protest in the Australian run detention centre on Papua New Guinea's Manus Island.

The Refugee Action Coalition says the protest began on Tuesday morning when issues with running water meant the asylum seekers could not shower.

It says tensions have been rising in recent days as most of the asylum seekers approach 18 months of detention on Manus Island and at least one protester has stitched his lips shut.

An asylum seeker in the Mike Compound says yesterday more than 220 people didn't eat breakfast and lunch, and he expects more will join in today.

"All of us we are standing under the shelter in my compound and we never go back to our room until we die. That's the message of my compound asylum seekers in here. The other thing is we have been threatened by security, "if you do any other demonstration or any kind of protest like this, we will deport you."

An asylum seeker in the Mike Compound on Manus Island.

An Australian Immigration Department spokesman says claims that transferees at the processing centre were involved in food and fluid refusal were incorrect.

The department confirms that a number of transferees are engaged in a peaceful protest within the centre, and the centre remains calm. 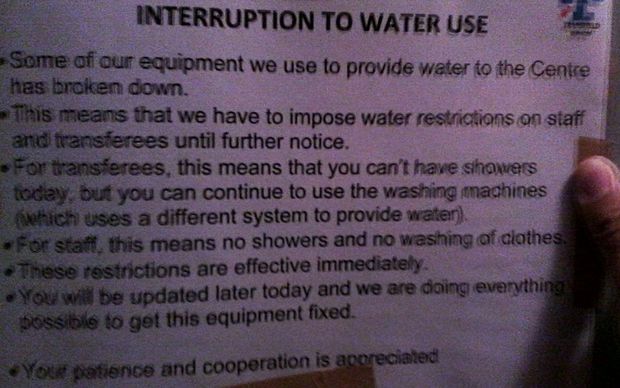