The volcanic ash that is stopping flights going to and leaving Tonga is also stopping New Zealand scientists from getting there to find out more about it. 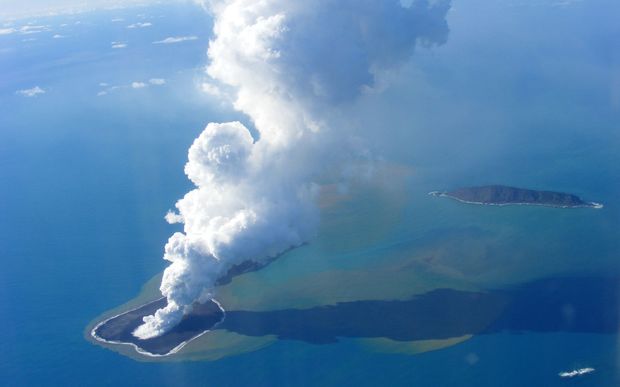 This picture taken on 19 March 2009 shows an aerial photo of ash rising into the air from an undersea volcanic eruption, part of the uninbabited islet of Hunga Ha'apai, 63 kilometres northwest of the Tongan capital Nuku'alofa. Photo: AFP

It was about 60km away from Tonga's main island but ash was drifting toward flight paths in and out of the capital.

GNS vulcanologist Brad Scott said that information on the volcano had only come from sightings from the mainland and from pilots.

"The primary objective is to get as close to the volcano as possible by flying on the upwind side, so we can actually ascertain just what the volcano is doing, how big it is, how far above sea level - if it is in fact still above sea level or is it acting as a submarine volcano."

The Tongan government had requested the scientists' assistance through the Ministry of Foreign Affairs.

Virgin Australia said it hoped to get a flight into Tonga from Sydney today and then on to Auckland, today.

Supervisor at the Liku'alofa Resort in Tonga, Glenda McPherson, said some stranded guests were becoming desperate. 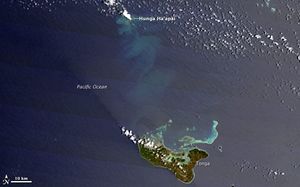 "We've had guests who were booked in who were supposed to be in Fiji and we have other guests that are looking at connecting flights - they have family coming to Auckland, they're connecting from Germany - they're not going to make it."

She said that some guests even had flights booked for medical treatment, who would not make their appointments due to flight delays.

Travel agency House of Travel was contacting about 100 of its customers who could not get into, or out of, Tonga because of the ash.

"It's a matter of dealing with the airlines to see what we can do in terms of getting availability for these people to get home or to get over there at a later date."

He said the delay showed the importance of having travel insurance before going away.

Mr Thomas said he hoped things will get back to normal quickly once the ash blew away.