Ash and smoke from a volcanic eruption in Tonga are causing some flight cancellations in the region. 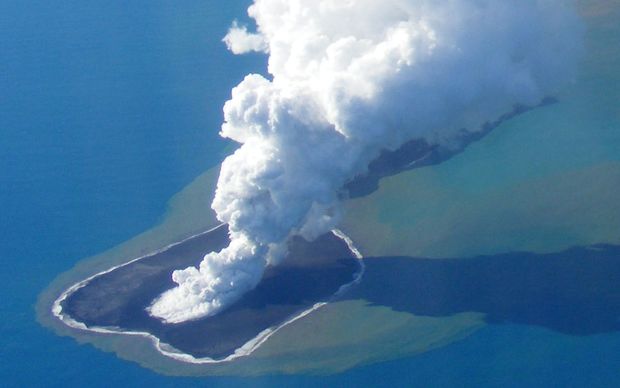 The Hunga Ha'apai in March 2009, when it last erupted. Photo: AFP

Air New Zealand and Virgin Australia say ash billowing out of the Hunga Ha'apai volcano has forced them to cancel flights in and out of Tonga, stranding hundreds of people.

Air New Zealand says about 300 people were booked yesterday and today to travel on two flights from Tonga to Auckland.

Air New Zealand had to divert its Auckland to Tonga flight yesterday to Samoa, and cancelled the same service to the country today.

Virgin Australia says it cancelled a Sydney to Tonga flight yesterday, and a Tonga to Auckland flight early this morning.

The general manager of the Scenic Hotel in Nuku'alofa, Graeme Horsley, whose flights to Auckland was cancelled, says ash has only recently been blown across the country.

"Over the last couple of days the weather pattern has changed and the wind is actually blowing the ash and smoke across the island."

"The plume is stretching up to about 30,000 feet and moving off in an east to south east direction. If there's no further eruption by later this evening, there's no further ash expected, it will have dissipated in the strong westerly winds."

GNS Science in New Zealand is sending vulcanologists to Tonga to help authorities observe the eruption.

The volcano, about 62 kilometres from the capital Nuku'alofa, has been erupting since late December and has today grounded international and local flights to and from Tonga.

A GNS Science vulcanologist, Geoff Kilgour, says as long as air traffic is possible, the two scientists will make observation flights close to the vent to determine the amount of ash in the plume.

He says they will also help the Tongan authorities with ongoing monitoring.

"We're hoping to help in any way possible with any suggestions for improved monitoring of the volcano or procedures in dealing with ash such as how they would advise the Volcanic Ash Advisory Centres."

Geoff Kilgour the Tongan government requested the scientists' assistance through the Ministry of Foreign Affairs.