A sacked Fiji TV senior executive says a letter from the public company to World Rugby was written by the Fiji government. 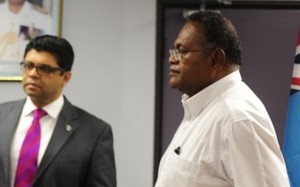 The content manager Tanya Waqanika, and the chief executive Tevita Gonelevu were fired in the fallout from Fiji losing television coverage of the Dubai Rugby Sevens.

World Rugby had objected to a government decree overriding broadcast rights that had been given to Fiji TV.

As part of negotiations with World Rugby, Fiji TV released a letter supporting the government's call to share the rights with the public broadcaster.

"I was in that meeting. There were five of us from Fiji TV, there was the attorney general, the solicitor general and the legal officer. The letter that was signed by Tevita and Ioane Naiveli, I can confirm it was not drafted by Fiji TV. It was given to us in that meeting by the AG himself to be signed by the two from Fiji TV."

Tanya Waqanika says on December the 31st, everyone will be expecting Fiji TV's licence to be extended for 12 years.