The third woman ever to be elected to Parliament in Solomon Islands has won a seat Temotu province, holding out the country's Foreign Minister, Clay Forau, by 22 votes. 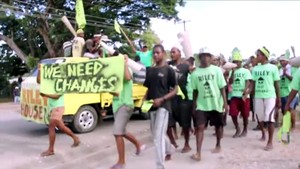 Freda Tuki Soria Comua, from the People's Alliance Party, won the Temotu Vatud seat, and appears to be the only woman to have won, out of the 26 women candidates.

A member of the Commonwealth Observer Group, Jessica Nkuuhe, says there are still big challenges for women and attitudes she encountered show equality is a long way off.

"One polling official told me, we don't allow women here to lead they are supposed be in the home and the kitchen. And with that kind of impression that the men have, you get the feeling that it is going to take a long time for women to make it through."

The independent for North Malaita, Vika Lusibaea, was the only woman in the previous parliament, but it appears she has lost her seat.